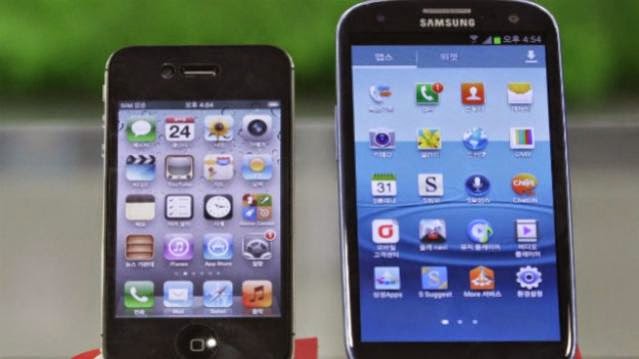 A Japanese court has ruled that Samsung could seek minimal damages from Apple for patent infringement, with both sides claiming victory in the tech titans’ latest legal skirmish over the design of their smartphones.

Japan’s Intellectual Property High Court ruled that Samsung could claim 9.96 million yen ($98,000) from its US arch-rival for use of Samsung’s data transmission technology, found to have been used in Apple’s iPhone 4 and iPad 2. The ruling amended a lower court decision in February last year that Samsung had failed to negotiate properly with Apple over the use of the technology.

But the high court said on Friday that Samsung can claim damages from Apple “within what amounts to patent licence fees” for the two products, while rejecting the South Korean firm’s demand for an injunction that would prevent the manufacture and sale of some of Apple’s smartphones.

Both of the companies — who are involved in a long-running global patents war, with each accusing the other of stealing aspects of their smartphone designs — welcomed the ruling.

“We welcome today’s ruling, which grants Samsung Electronics the right to seek damages for Apple’s infringement of our standard-essential patent, which relates to the iPhone 4 and the iPad 2,” Samsung Electronics said in a statement. “We will continue to take the measures necessary to protect our intellectual property rights.”

Apple Japan said that the damages awarded to Samsung in this case were “in line with what we’ve always believed was fair”, while welcoming the court’s decision to reject the injunction against it. “We applaud the court for standing up to Samsung and defending the integrity of the international patent system,” the company said.