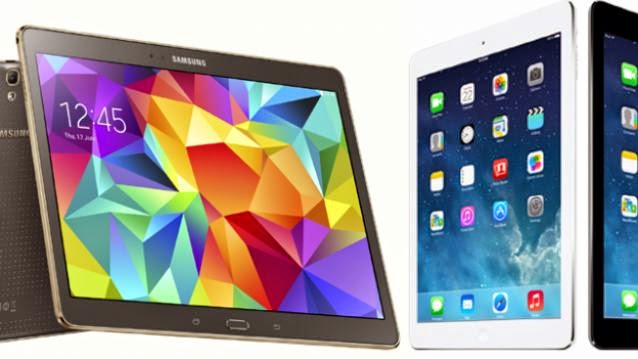 Samsung has brought out its big guns with the new Galaxy Tab S line-up. This is perhaps the first time that we are seeing Samsung pack in everything its known for into a tablet line-up—from the ultra high-resolution Super AMOLED displays, to powerful octa-core processors to top-end graphics chips.

But the reigning tablet champion is the Apple iPad Air and it’s quite a tablet to beat, as we saw in our review. We absolutely love Apple tablet, but Samsung does have an attractive offering too. Before we can compare them head on, let’s take a look at the raw specs to see which one comes out on top on paper.

Apple iPad Air
The iPad Air is a barnstormer of a tablet. With its wafer-thin design, excellent ergonomics and a stunning display, there’s really no tablet better than it at the moment, in the 10-inch category. To be exact, the Air has a 9.7-inch display with a Retina-class resolution of 2048×1536 pixels and 264 pixels per inch. 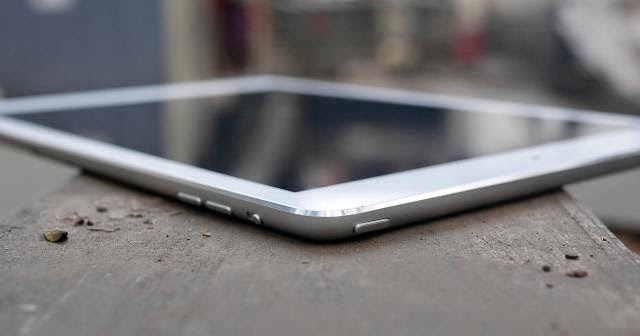 The iPad Air is powered by the A7 processor, one of the fastest in the market. The 64-bit A7 64-bit system can handle data in bigger chunks than 32-bit processors. It’s also reputed to be one of best for power management.

Apple’s tablet has a 5-megapixel iSight camera, which is capable of recording HD videos at 1080p. Don’t expect iPad cameras to be like their iPhone counterparts. The front has an HD FaceTime camera. And the battery is rated for 10 hours of usage, something we can confirm is more or less on the money.

Samsung Galaxy Tab S 10.5
Samsung announced two sizes in the new Galaxy Tab S series and both are aimed squarely at the iPads, although in typical Samsung fashion, they have larger displays. Samsung’s 10.5-inch tablet comes with a WQXGA (2560×1600, 16:10) Super AMOLED display, that’s just a little higher in resolution than the iPad Air. Samsung has it beaten in terms of pixel density too with 288 PPI. The Samsung Galaxy Tab 10.5 Wi-Fi weighs 465 g (467 g for the LTE version), while the iPad Air is about the same at 469g. At 6.6 mm, Samsung’s tablet is also thinner than the iPad Air (which is 7.5 mm thick). 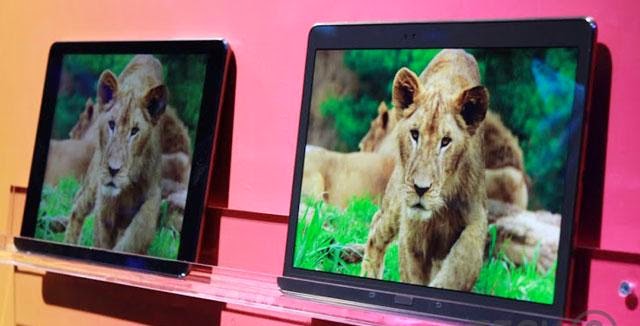 LTE variant of the tablet packs a Snapdragon 800 chipset with a 2.3GHz quad-core Krait 400 CPU, while the Wi-Fi version offers Samsung’s Exynos 5 Octa chipset with a quad 1.3GHz Cortex-A7 and quad 1.9GHz Cortex-A15. Both come with 3GB of RAM and with either 16GB or 32GB of internal storage, with a microSD card slot. The Tab S has a 8MP camera with LED flash, capable of recording 1080p video, while the front camera is a 2.1MP snapper. Despite the slim waistline, battery in the 10.5-inch tablet is a generous 7,900mAh Li-Ion unit. Samsung has not specified a rated battery life.

Here is the breakdown of the specs: 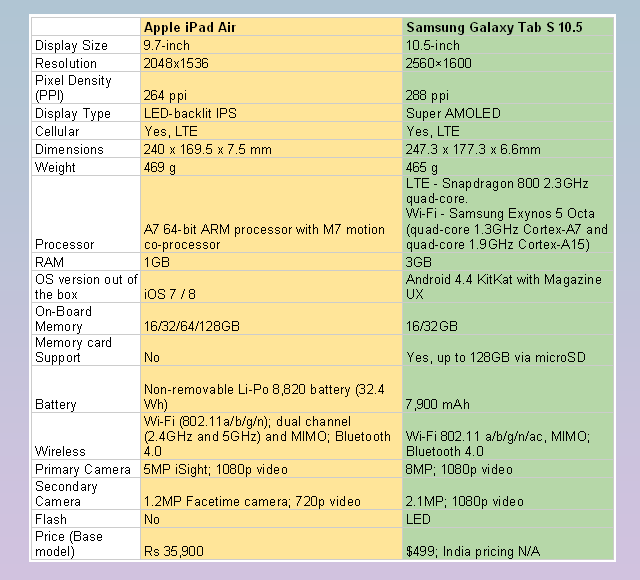 On the face of it, the Tab S wins with higher specs, but the iPad Air is a proven tablet with a superb hardware-software integration, while Samsung’s version of Android might not to be everyone’s liking. The iPad Air is also more compact, which could work in its favour, but Samsung has managed to keep the size of its larger tablet under control as well.

We’re itching to see how Samsung’s latest will compete with the iPad on an everyday basis, but in terms of pure specs, the Korean company has a slight advantage.