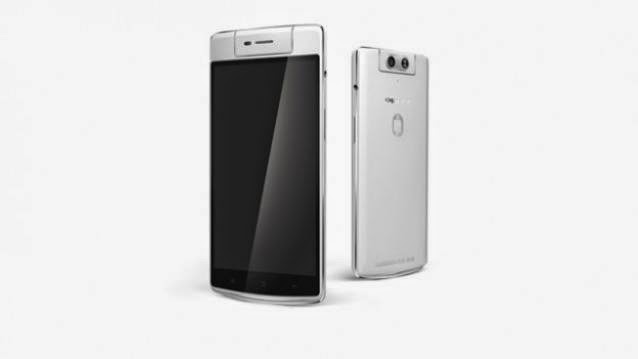 Oppo has unveiled it’s flagship N3 smartphone – an iterative refresh to last year’s N1. One of the biggest talking points of the N3 is perhaps the rotating camera which has received some nifty improvements from its predecessor. The Oppo N3 is priced at USD 649, which converts to approximately Rs 41,000. Along with the new camera features, here’s what’s new about the Oppo N3 smartphone:

5.5-inch display: The Oppo N3 features a 5.5-inch Full HD display with a pixel density of 403ppi. This is the same resolution seen on the iPhone 6 Plus, and is one of the sharpest screens you’ll find on a phablet. The screen gets a layer of Corning Gorilla Glass 3 for better durability. The screen size is down from 5.9-inches in the N1, to make it easier to use one-handed.

16MP rotatable camera: The Oppo N3 features a 16MP camera which can rotate up to 206 degrees. This means you get a high resolution camera for taking self-shots other than your usual photos. The camera lets you take vertical panoramas and has a motorised focus control for taking quick moving shots such as a sports event. The motorised camera can be rotated by swiping your finger back and forth on the screen or using the O-click accessory which comes in the box.

O-Click: The O-Click is a Bluetooth camera remote control, which has been updated to be used as a phone finder and for accepting and rejecting phone calls. As with the original N1, the O-Click lets you automatically rotate the camera to use it as a front or a back camera.

VOOC mini charger: Along with a standard charger, the N3 comes with a mini charger with VOOC technology, which claims to charge your phone from zero to 75% in 30 minutes. The mini charger was also available in the N1, but the N3 has a smaller version of the charger to make it easier to carry around.