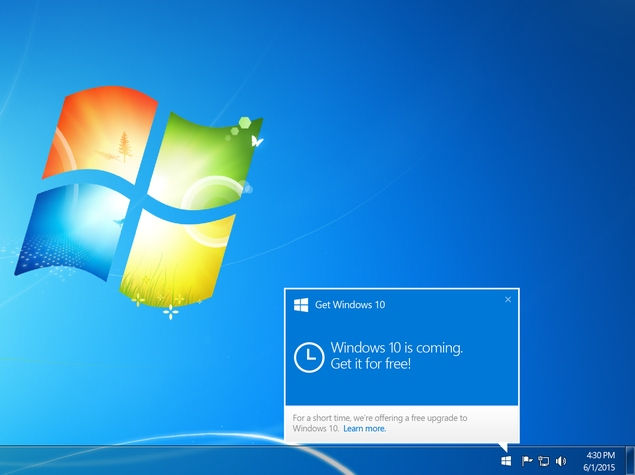 Microsoft on Friday put up a blog post detailing important changes ahead of the release of Windows 10 for PCs and tablets on July 29. This included a hitherto undetailed way for users to get a genuine Windows 10 copy for free, and even stay activated – all they needed to do was to join the Windows 10 Insider Program, install the preview (build 10130), and connect their Microsoft Account. On release day, preview users would receive the final release build as a regular update.

However, by Saturday, the company had updated its stance and the blog post. While Windows Insiders (Windows 10 Insider Preview users) will receive the final release build of Windows 10, the build will not remain activated. The author of the blog post, Microsoft’s General Manager for Operating System Group’s Data and Fundamentals Team, Gabriel Aul, on Twitter further clarified the build will remain genuine.

The stance change is significant, as users can fresh install the Windows 10 Insider Preview build from an ISO file without requiring a licensed copy of Windows – giving new users a method to get genuine Windows 10 for free without paying a dime. The blog post also added, “Once you have successfully installed this build, you will also be able to clean install on that PC from final media if you want to start over fresh.”

To be precise, the blog post had initially read, “As long as you are running an Insider Preview build and connected with the MSA you used to register, you will receive the Windows 10 final release build and remain activated.” It was updated on Saturday to remove the last three words. This implies at some point, Windows Insider users will have to pay to remain activated, and enjoy the full range of services – though what activation brings hasn’t yet been specified.

Another addition in the updated blog post was further clarification regarding the free Windows 10 upgrade offer. Aul said, “It’s important to note that only people running Genuine Windows 7 or Windows 8.1 can upgrade to Windows 10 as part of the free upgrade offer.”

To recall, the Redmond giant had last month backtracked and clarified that Microsoft would not offer a free Windows 10 upgrade to users of non-genuine Windows copies. Instead a paid upgrade path will be provided.

Also detailed on the blog post was use of the Microsoft Account. Aul said, “Once available on July 29th, you do not need an MSA to upgrade Windows 10 on your Windows 7 or Windows 8.1 PCs if they are not receiving Insider Preview builds. You will not be required to use an MSA on new PCs that come with Windows 10 preinstalled or clean installed from media. Some features in Windows 10 do require an MSA to use, such as downloading apps in the Windows Store.”