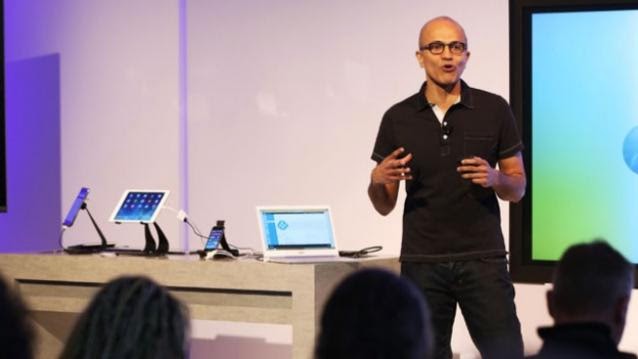 Nadella started off with a bang with the iPad version of MS Office (Image credit: Reuters)

Ever since he was named the third CEO in Microsoft’s legendary history, Satya Nadella has been talking of making huge changes – organisational, and culutural – within the company. He famously made it clear that going forward Microsoft would be a ‘cloud-first, mobile-first’ company, clearly setting himself apart from predecessor Steve Ballmer. He launched Office for IPad, removed the license fee for certain Windows hardware partners and has taken the first steps towards establishing a devices and services empire at Redmond.

And yesterday’s announcement of up to 18,000 job cuts around the world has a key role to play in this transformation. As is clear from his address to the employees and his statements since February, Microsoft is making some big changes. The quick pace of these changes reflects Nadella’s belief that Microsoft’s traditional strength of being the hub of business and personal computing are not longer paramount. So what exactly is Nadella trying to change at Microsoft?

Focus on innovations
In a highly competitive market, with new product categories launching all the time, Microsoft needs to move faster than it did with smartphones. This has been one of the key focus areas for Nadella ever since he has taken over as CEO. Last week’s memo to employees saw Nadella writing he had asked senior leaders to “evaluate opportunities to advance their innovation processes and simplify their operations and how they work.”

At Code Conference, Nadella said innovation in the PC ecosystem comes from the software layer, hardware layer and apps, and that Microsoft would have to be active in all those aspects to drive innovation.

Increasing accountability
Nadella said the job cuts were a first measure to simplify the way Microsoft works. Nadella has maintained ever since taking over from Ballmer that Microsoft needs an institution-wide change in culture as the tech industry grows more agile and moves faster.
He has said that Microsoft needs to inculcate a culture of innovation and change, and believes that the current industry does not respect tradition as much as innovation, which is why the company needs to move past its laurels and focus on catering to an increasingly mobile world.
Leaner management
Flat is not just a design trend this season. “We plan to have fewer layers of management, both top down and sideways, to accelerate the flow of information and decision making. This includes flattening organizations and increasing the span of control of people managers,” Nadella wrote in the letter. This is again an effort to step up to the competition as quickly as possible. With a leaner management structure, Microsoft will be in a better place to react to big changes, game changes and will likely never be as slow as it was with smartphones after the iPhone.

Nokia integration
This is again part of the cluster of changes geared towards increasing innovation efforts within the company. While the company has made some progress in the low-end and buddget segments with Windows Phone, the high-end tier remains largely iPhone and Android. That situation could soon change as Nadella hopes to bring more focus in mobile hardware and software development, especially in the high-end segment. “To win in the higher price tiers, we will focus on breakthrough innovation that expresses and enlivens Microsoft’s digital work and digital life experiences.”

Whether these sweeping changes actually have an impact on the way Microsoft works and reacts to its rivals will only become clear when the process is completed in six months. For now though, Nadella has clearly stamped his name as a leader not afraid to make hard changes and take tough decisions, by announcing the deepest cuts in Microsoft’s 39-year history.