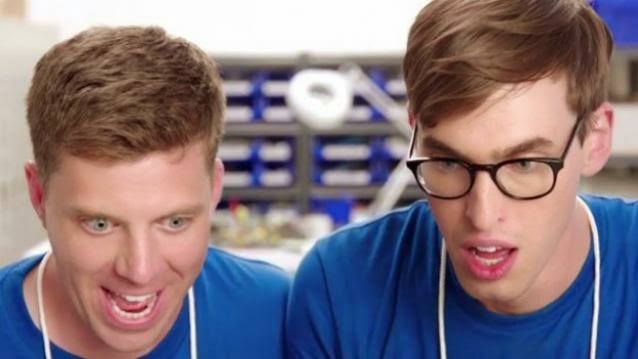 A screenshot from the Samsung video.

So we know how Samsung and Apple hate each other. And yes, every time a new Apple device comes out, Samsung tends to do a series of videos reminding people that Samsung is way cooler than Apple.

Yesterday, we had noted how Samsung had made sure that Galaxy Note 4 was the top promoted trend on Twitter ahead of the iPhone 6 and iPhone 6 Plus. Today, Samsung has gone all out with mocking the Apple iPhone 6 and launched four new videos.

The video series shows two geniuses working in an Apple Store and there are bunch of storylines, each of which ends with Note 4 appearing in the end.

The first video in the four-part series shows one Apple genius trying to get the livestream to work but that doesn’t happen. The other one gets really frustrated and points out that they’re in technology and if they can’t get a live-stream to work then it’s just sad. Yup true.

Apple’s live-stream failure is the latest public image failure for the company and given that it happened during an event which was stated as a historic launch for Apple, makes it ten times as worse. Sadly a lot of Apple fans are agreeing with this video as well.

The second video shows the two Apple geniuses watching the keynote and getting excited about the big screen until they realise, that well it’s just a big screen. Apple is definitely the late comer to the big-screen party and social media has been full of jokes about how the iPhone 6 is just like the Nexus 4 from two years back and that Apple hasn’t really done anything new.

By keeping the screen resolution of the iPhone 6 at 750 p, Apple is getting mocked a lot, given that a lot of other premium smartphones have moved to 1080p or even higher resolutions.

The third and fourth videos are about promoting the Note 4′s S-Pen and the Multi-task window. Frankly these two aren’t just as funny as the other two videos. S-Pen, which is great, and Multi-task window have been around in the Note series for sometime now.

Watch all four videos below:

Our personal favourite: The live-stream burn for Apple. That must have really hurt given that it came from Samsung.