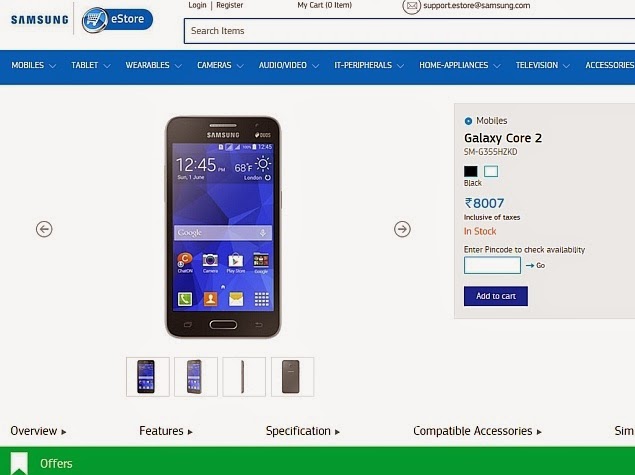 Samsung has officially slashed the price of Galaxy Core 2 to Rs. 8,007. The smartphone is available on Samsung India’s official online store at the new price.

Notably, the Galaxy Core 2 was launched in July at a price of Rs. 11,900. The Samsung Galaxy Core 2 smartphone is the successor to the popular Galaxy Core launched in June last year at Rs. 15,690.
The price cut was first tipped on Wednesday by established Mumbai-based retailer Mahesh, saying retail price had been dropped to Rs. 7,990.

The Samsung Galaxy Core 2 supports dual-SIM and runs Android 4.4 KitKat out-of-the-box with the company’s TouchWiz Essence UI on top. It comes with a 4.5-inch WVGA (480×800 pixels) TFT display.
It is powered by a quad-core processor clocked at 1.2GHz coupled with 768MB of RAM. The Galaxy Core 2 sports a 5-megapixel autofocus rear camera with LED flash and VGA (0.3-megapixel) front-facing camera. The 4GB of inbuilt storage on the Galaxy Core 2 is expandable via microSD card (up to 64GB).

Connectivity options on the smartphone include Wi-Fi b/g/n, Bluetooth 4.0, Micro-USB and 3G. The Samsung Galaxy Core 2 is powered by a 2000mAh battery. The handset measures 130.3x68x9.8mm and weighs 138 grams.

Earlier this month, Samsung had also launched the successor to the popular Galaxy S Duos 2 in India, the Galaxy S Duos 3, priced at Rs. 8,150.

The smartphone is also available on the Samsung’s India store.