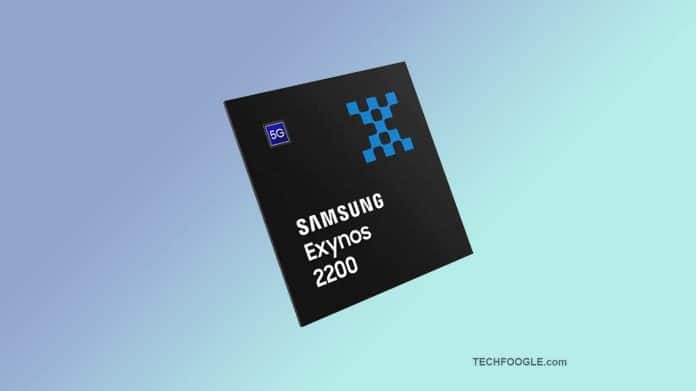 Samsung Exynos 2200 with AMD RDNA 2 GPU and Ray Tracing has been announced.

The Samsung Exynos 2200 flagship chipset is now official after being leaked and delayed. The next-generation SoC, which replaces the Exynos 2100 from last year, has an AMD RDNA 2-based GPU, ray tracing technology (a first for a mobile chipset), and more. Here’s a rundown of the Exynos 2200’s features.

The Exynos 2200 has AMD’s RDNA 2-based Xclipse GPU, which was developed as part of Samsung’s 2019 relationship with AMD. In December 2021, the inclusion of the RDNA 2 architecture was also hinted at. However, it was supposed to debut on January 11, but that never happened.

This AMD-powered GPU supports many capabilities, including hardware-accelerated ray tracing, making the Exynos 2200 the first mobile chipset to do so. Ray tracing technology, for those unfamiliar, attempts to imitate light’s behaviour and properties to create realistic visuals and lighting effects.

Other features include variable-rate shading, which allows developers to reduce shading in certain places to minimise GPU tasks and conserve power, as well as the advanced multi-IP governor (AMIGO) for enhanced speed and economy.

The Exynos 2200 is built on a 4nm EUV (extreme ultraviolet lithography) technology and has ARMv9 CPU cores. One Cortex-X2 flagship core, three Cortex-A710 large cores, and four Cortex-A510 tiny cores comprise the octa-core CPU structure. The chipset also has an upgraded NPU, which has more than quadrupled its performance over its predecessor.

The Exynos 2200 supports up to 200MP cameras, 108MP pictures at 30fps, 64MP+36MP photographs in dual-camera mode, and 8K movies in photography. For more realistic footage, 8K movies use the sophisticated multi-format codec (MFC). Thanks to the NPU, there are also some AI elements. The goal is to improve photographs by identifying several objects and then adjusting the colour, white balance, and other variables.

The Exynos 2200 goes up against Qualcomm’s Snapdragon 8 Gen 1 mobile platform, Apple’s A15 Bionic chipset, MediaTek’s Dimensity 9000, and even Google’s Tensor processor. It will be interesting to see how it compares to the capable competition. The processor is presently in mass production and will most likely power the Galaxy S22 series of smartphones.