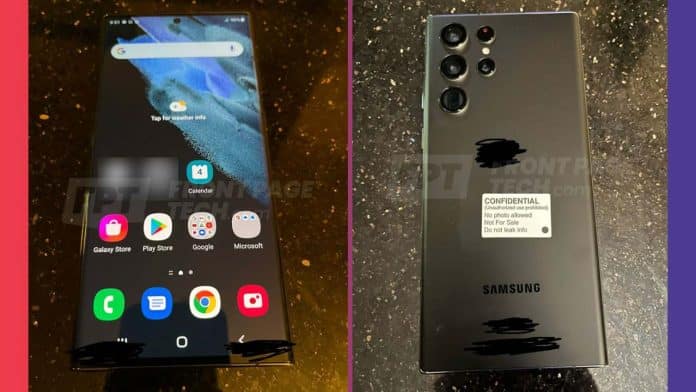 We saw leaked renderings of Samsung’s upcoming flagship earlier this year, shortly after reports about the availability of the S Pen on the Galaxy S22 Ultra appeared online. Jon Prosser of Front Page Tech, a reputable source, has now revealed real-life photographs of the Galaxy S22 Ultra, which confirm the S Pen slot, curved edges, and more.

The leaked photographs, according to Jon Prosser, are from the finalized model of the S22 Ultra before mass production. We can see a dedicated S Pen slot in the bottom-left corner of the photos, which eliminates the need for an extra case to hold the S Pen. To fit the S Pen slot, Samsung appears to have increased the thickness of the smartphone.

Curved display edges are also included, as is a punch-hole selfie camera cutout on the front. Take a peek at the photographs that have been leaked below:

When we look at the back, we see a quad-camera arrangement instead of the polarising P-shaped camera module seen in the leaked renderings. A 108MP primary camera, 12MP ultra-wide sensor, 10MP 3X telephoto lens, and another 10MP telephoto lens with 10x optical zoom make up the camera configuration. As a result, Samsung won’t be introducing significant camera hardware advancements with the S22 series.