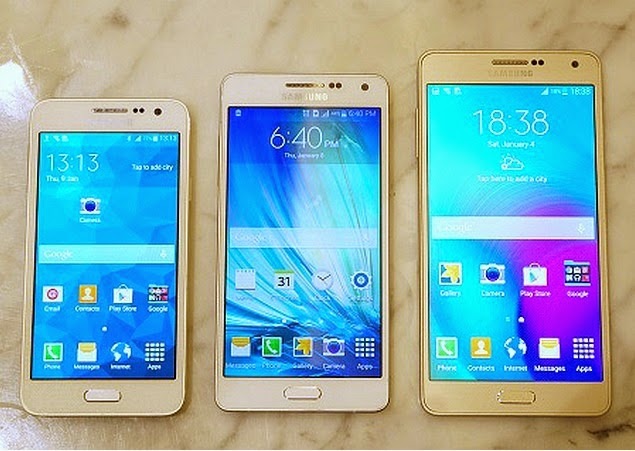 After innumerable leaks and much speculation, the Samsung Galaxy A7 finally appears to be official. While on Thursday Samsung is said to have unveiled its metal-clad Galaxy A7 smartphone in Malaysia, the South Korean giant is now being reported to have launched the device in the Philippines at PHP 24,990 (roughly Rs. 34,700).

It is worth mentioning that the firm has already announced its Samsung Galaxy A3 and Galaxy A5 handsets in India this week.

While there are still no details on the Samsung Galaxy A7’s availability as per Yugatech, the previous report from Malaysia added the handset would go on sale in Malaysia starting next month. Samsung is however, yet to confirm the launches in both countries, or list the smartphone on any of its websites.

The Samsung Galaxy A7 is said to run Android 4.4.2 KitKat and comes with dual-SIM, dual-standby support. The device includes a 5.5-inch full-HD Super AMOLED display with pixel density of 401ppi.

Powered by the company’s proprietary Exynos 5433 octa-core CPU (1.8GHz cortex A53 cores and 1.3GHz cortex A53 cores), the Samsung Galaxy A7 is equipped with 2GB of RAM. It bears 16GB of inbuilt storage with an option to expand that via microSD card (up to 64GB).

The Samsung Galaxy A7 sports a 12-megapixel autofocus rear camera with LED flash along with a 5-megapixel front-facing camera. NFC, LTE, Wi-Fi, Bluetooth, GPS/ A-GPS comprise the smartphone’s connectivity options. Backed by a 2600mAh battery, the Galaxy A7 measures 150.9 x75.9×6.3mm.

Samsung also launched a brand new selfie-focused smartphone series alongside the A-series in India, the Galaxy E5 and the Galaxy E7 from the E-series, priced at Rs. 19,700 and Rs. 23,000 respectively. They will go on sale from January 20. Both Galaxy E-series smartphones feature Super-Amoled displays, and support what Samsung calling ‘Hybrid Dual-SIM’, allowing the second SIM slot to be used as a microSD card slot.

For full coverage of the Consumer Electronics Show from Las Vegas, visit our CES 2015 page.