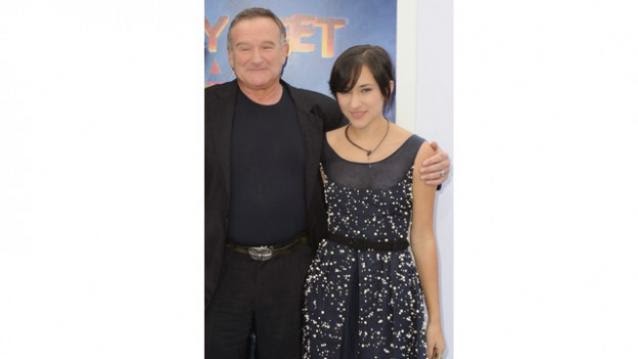 Robin Williams’ daughter has abandoned her online social media accounts in disgust following what she called “cruel and unnecessary” messages following her father’s death, a move that has prompted Twitter to explore how it handles such situations.

Zelda Williams, 25, wrote that she was stepping away from her Twitter, Tumblr and Instagram accounts “for a good long time, maybe forever.”

The move came after at least two users upset the grieving actress by sending disturbing images and verbal attacks. In one of her last tweets on Tuesday night, Williams asked fellow users to report her alleged tormentors to Twitter managers. “I’m shaking,” she wrote. One of the images was a Photoshopped image of Robin Williams purporting to be his corpse.

Well-wishers and fans online quickly rallied to Zelda Williams’ defense, and the accounts of both alleged bullies were suspended by Wednesday. Facebook, which also owns Instagram, said the photo violated its policy and was “being actively flagged and removed across both platforms as it pops up.”

Twitter went further. “We will not tolerate abuse of this nature on Twitter,” Del Harvey, who heads Twitter’s Trust and Safety Team, said in a statement Wednesday afternoon.

“We have suspended a number of accounts related to this issue for violating our rules and we are in the process of evaluating how we can further improve our policies to better handle tragic situations like this one. This includes expanding our policies regarding self-harm and private information, and improving support for family members of deceased users.”

Last summer, Twitter introduced a one-click button to report abuse and updated its rules to clarify that it will not tolerate abusive behavior.

Zelda Williams also alluded on Instagram to users being hateful following her father’s suicide: “In this difficult time, please try to be respectful of the accounts of myself, my family and my friends. Mining our accounts for photos of dad, or judging me on the number of them is cruel and unnecessary.”