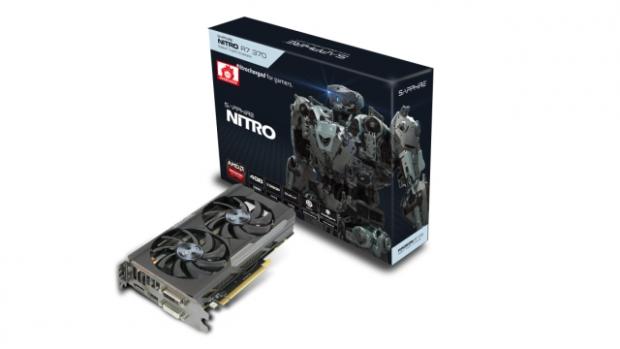 When it comes to building gaming rigs in India, the mid-range cards still have a lot of audience interest than the ones on the bleeding edge of performance such as the GTX 980Ti’s of the world. Now we have already seen how the GTX 950 performs – offering a 1080p performance at sub Rs 20,000 price point. AMD released the R7 370 to compete against this very SKU from its rival. We got the Sapphire R7 370 Nitro for testing, which is a factory overclocked card with its own custom cooler. Let us see how it fares. 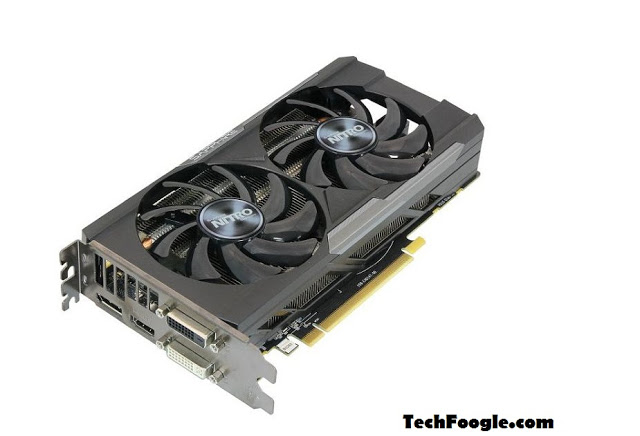 We have been seeing some really good takes on the stock Nvidia GTX 950 designs from the likes of ZOTAC and MSI. So when we got the Sapphire R7 370 Nitro, we were a bit underwhelmed with the aesthetics. Don’t get us wrong, the Sapphire Nitro card is made of sturdy plastic frame which has a black and gray colour tone, but it dosen’t make the card stand out like say the Strix cards from Asus or the GTX 950 from MSI we had reviewed last. There is enough space to house two 100mm fans atop the cards aluminum heatsink. This cooling technology is called the Dual-X dual fan cooling system and it brings the air in and pushes is down the multi-finned heatsink. There are openings on the plastic sheath at the top and bottom to allow easy air flow. 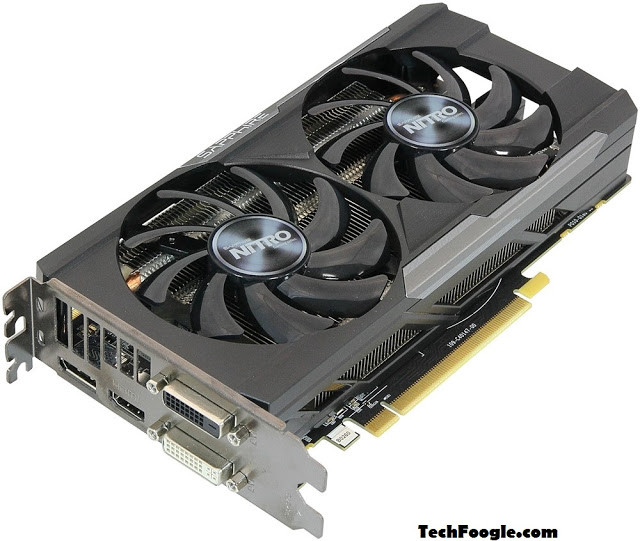 In terms of the display connectors, you get two DVI ports, an HDMI 1.4a port and a DisplayPort 1.2. On the opposite edge of the card you have a 6-pin power connector. There is a single Crossfire slot on the top as well. On the rear side there is no backplate protection. 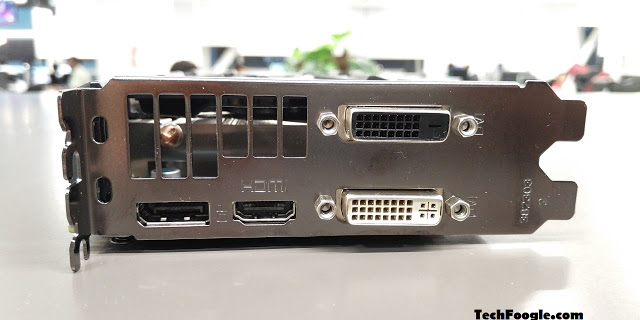 The Sapphire R7 370 Nitro comes with a dual-slot cooler and is based on the 28nm Pitcairn core housing Graphics Core Network (GCN) architecture. The Pitcairn core has around 1024 stream processors, 64 texture units, 32 raster operators (ROPs) and there is a 256-bit memory bus. The GPU is clocked at 985MHz which is 10MHz over the base clock speed of 975MHz. The Sapphire R7 370 Nitro also houses a whopping 4GB of GDDR5 RAM. 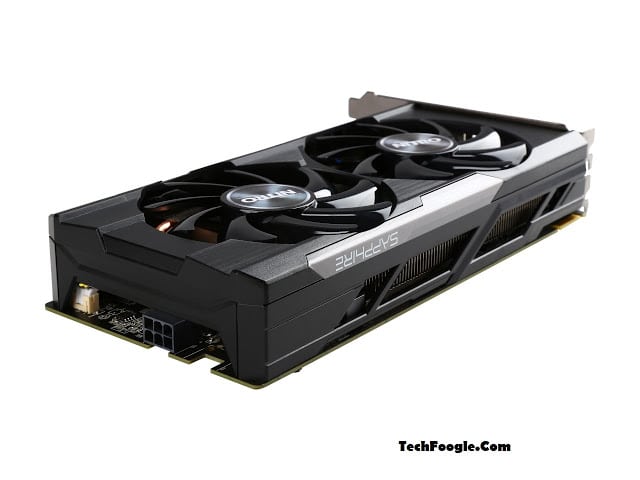 3DMark is a computer benchmarking tool created and developed by Futuremark Corporation to determine the performance of a computer’s 3D graphic rendering and CPU workload processing capabilities. The latest version makes extensive use of all the new features in DirectX 11, including tessellation, compute shaders and multi-threading. We used the “Performance” preset for this benchmark. 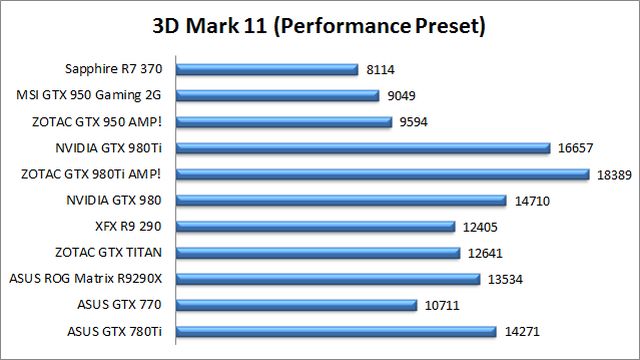 This is another synthetic benchmark from Futuremark. We test the card on the Fire Strike Extreme test as it is designed for the enthusiast-level graphics performance. It test the DirectX11 capabilities, using extreme tessellation and volumetric illumination along with smoke simulations which use compute shaders and dynamic particle illumination. 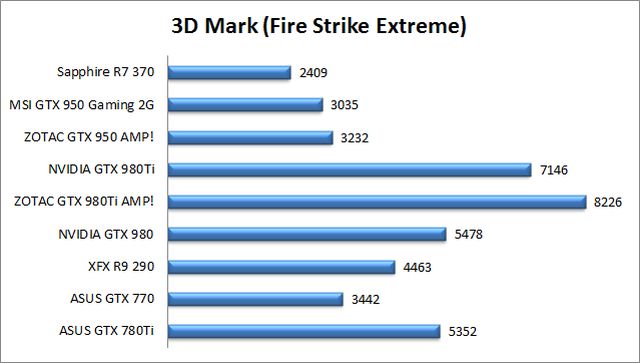 Metro: Last Light is a first-person shooter video game that continues Metro’s legacy of being one of the most demanding games for the best of GPUs. The game has a lot of DX11 eye-candy, which really puts a strain on any GPU. All DX11 features were enabled for the benchmark and we used the built-in benchmark for this test. 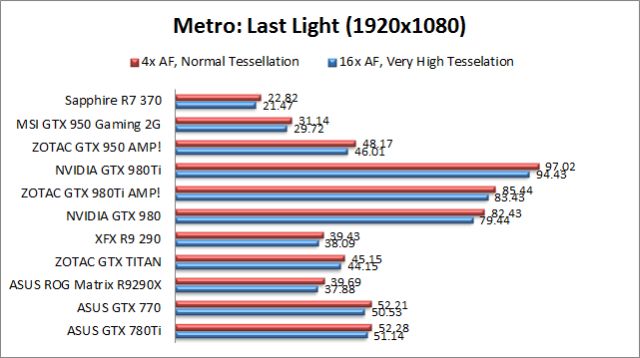 Bioshock Infinite developed by Irrational Games uses a modified version of the Unreal Engine. It’s a first-person shooter which takes place in a fictional floating city. We ran the benchmark using the Adrenaline Benchmark tool and used the Ultra and Medium settings. In the Ultra settings you have FXAA On, Ultra texture detail, 16x AF, Ultra dynamic shadows and with the Medium settings you have FXAA On, High texture detail, 8x AF and High dynamic shadows. 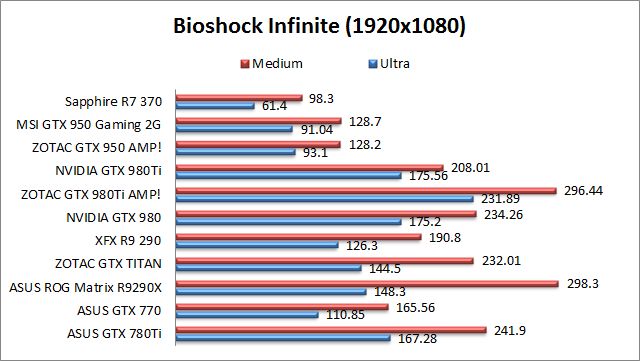 Tomb Raider is a third-person shooter which is a reboot of the famous series with Lara Croft as the protagonist. In this reboot, she is ship-wrecked on a mysterious island which presents its own set of challenges which Lara has to overcome. The game is based on a customised CrystalEngine. It also features the AMD TressFX technology which adds more realism to hair rendering and physics. We ran the benchmark using the in-built benchmark tool at the Ultimate and Ultra settings. On the Ultimate preset, you have TressFX activated, 16x AF, FXAA whereas the Ultra preset has Normal hair quality, 16x AF, FXAA. 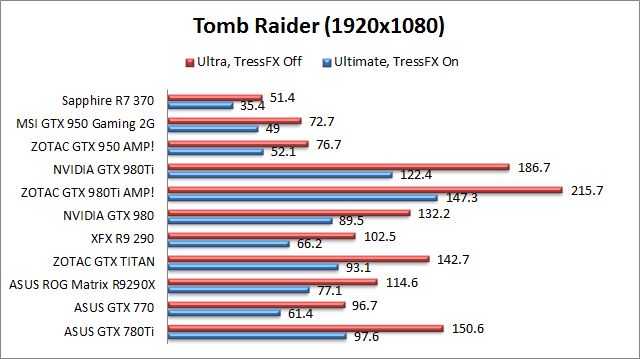 The Witcher 3: Wild Hunt is an open-world action role-playing game. The story revolves around the protagonist Geralt of Rivia who is on a journey through the lands of the Northern Kingdoms. It is based on the REDengine 3 game engine which is meant for non-linear RPGs. Since the game does not have its in-built benchmark we played a set saved game which involved couple of action scenes and riding on horseback through various terrains including through water. We used FRAPs to keep track of the frame rates. The graphics section also has a separate post processing section. We played using Ultra and Medium settings. 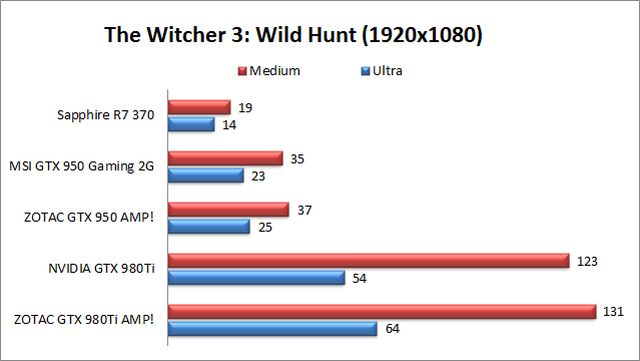 We noted the temperature of all the participating cards at idle and load states. The fan speeds were kept on auto. We noted maximum load temperatures after running benchmarks such as FurMark at 1080p preset, 3D Mark 11, Battlefield 3 and Metro: Last Light and taking an average. 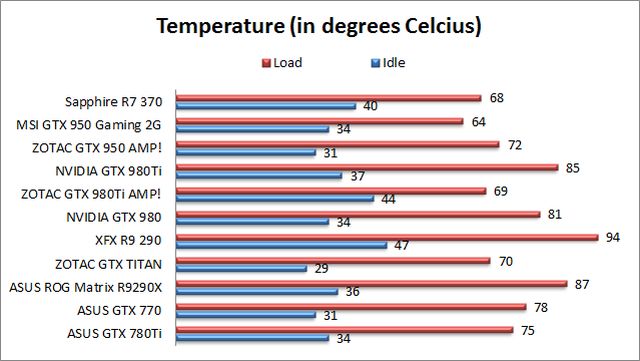 We used an energy monitoring device to measure the power consumed by the total rig with the graphics cards on them. The Cooler Master 800W PSU was plugged into the power meter which gave out the power consumed in Watts on the display. After powering on the system we let it stay unused for a good five minutes to get the idle power reading and then ran three instances of FurMark 1080p preset to get the maximum load power. 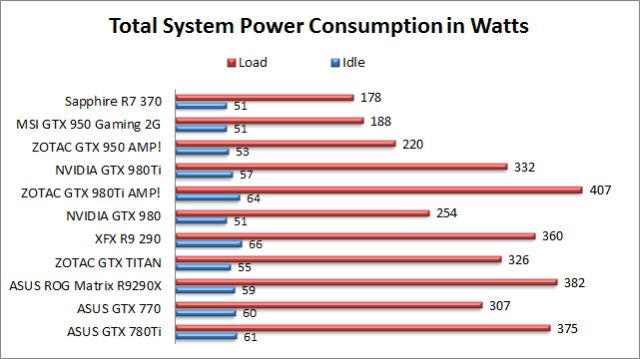 As is evident from the charts above, the GTX 950 offers a better performance than the R7 370 in most departments. It achieves this while running cooler than the R7 370 as well. If that is not enough, the price of the MSI GTX 950 is around Rs 2,000 lower than the Sapphire R7 370 Nitro. The only advantage that is there with the R7 370 is that it comes with 4GB of RAM, which is double that was seen on the GTX 950 card we had reviewed. What this means is that you can get a better visual quality as more RAM means, the card can hold more texture, geometric and graphical data – thereby giving you a more realistic video or the option to use a multi-monitor setup. This is the only incentive to go for the Sapphire R7 370. But this is at the cost of the frame rates.

So the decision is pretty much evident that the GTX 950 is the card to go for amongst the two. The regular R7 370 is available for around Rs 16,000 which is still a better deal than the Nitro, although that comes at half the video RAM capacity. Unless the pricing of the R7 370 is less than the GTX 950, it is very difficult to recommend it. You could check out the Asus Strix R7 370 4GB which is available for Rs 15,000 with online retailers. Looking at the market share between the two rivals, the scales are clearly tilted in favour of the green Nvidia team and AMD and partners should really offer an incentive for buyers to consider the R7 370. With the Nitro, that is certainly not the case.