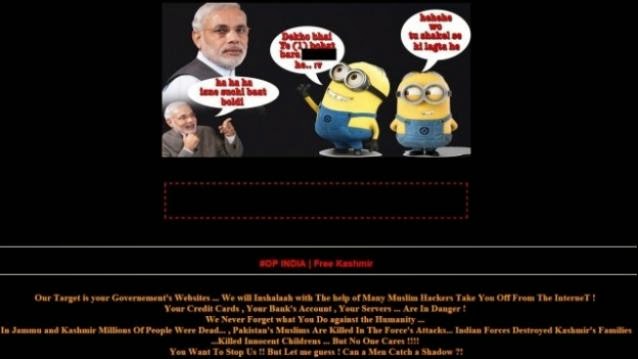 A day after South Indian actor Mohanlal’s website was hacked, the same ‘Team Cyber Warriors’ has today hacked the Press Club of India website. This group of hackers allegedly from Pakistan, is on a mission to keep hacking government of India websites stated the message on the webpage.  This is being seen as a retaliation by Cyber Warriors against the hacking of the Pakistan People’s Party by alleged Indian hacker group called Black Dragon. With the tensions happening across the border, hackers have started their own battle in the virtual world.

The hackers have posted derogatory messages against PM Modi, while the rest of the message is similar to what was seen on actor Mohanlal’s website. “We (will) never forget what you did against humanity. In Jammu and Kashmir, millions of people are dead. Indian forces killed Kashmiri families, killed innocent children. But no one cared! Your bank accounts, credit cards, servers are in danger.” This was followed by, “Dear admins, we just wanted to publish this message; Dear Citizens: Muslims are not terrorists; Dear President: You can use your guns but you will one day stop (sic) Not because you wouldn’t, but because you couldn’t anymore”

The hackers also spoke about attacking servers and hacking into credit card and bank details. As of the time of writing, the Press Club of India website still appears defaced.

A report last month pointed out that Bhartiya Janta Party’s (BJP) portal and the personal website of Prime Minister Narendra Modi are among India’s most targeted sites by hackers.