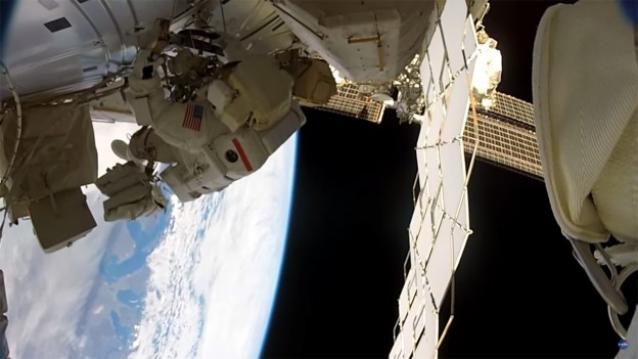 Two American astronauts on Friday carried out the 200th spacewalk at the International Space Station (ISS) despite an early equipment glitch that had delayed and shortened the mission.

During the spacewalk, NASA‘s Peggy Whitson and Jack Fischer on Friday “successfully replaced a large avionics box that supplies electricity and data connections to the science experiments”, the US agency said in a statement.

The astronauts also completed additional tasks to install a connector that will route data to a device called the Alpha Magnetic Spectrometer, repair insulation at the connecting point of the Japanese robotic arm, and install a protective shield on the Pressurised Mating Adapter-3, which will host a new international docking port for the arrival of commercial crew spacecraft.

It’s the ninth spacewalk for Whitson, who already holds the American record for most spacewalks by a female astronaut, and the first for Fischer.

The spacewalk began at 9.08 a.m., about one hour after the planned start time, and ended at 1:21 p.m.
NASA decided to shorten the mission from the original six and a half hour plan, due to a glitch during earlier spacewalk preparations.

The problem involved “a small water leak” in a service and cooling umbilical (SCU) that charges up Fischer’s spacesuit, so Whitson and Fischer had to share one SCU.

“This was not a leak in Fischer’s suit,” NASA said, adding “The sharing of the SCU resulted in additional draw in battery power from the suits during preparations while in the Equipment Lock, reducing the battery power available for use during the spacewalk.”

Spacewalkers have now spent a total of 1,247 hours and 55 minutes working outside the station during 200 spacewalks in support of assembly and maintenance of the orbiting laboratory, NASA said.

The first spacewalk was conducted on December 7, 1998, by NASA astronauts Jerry Ross and Jim Newman during a mission by the now-retired space shuttle Endeavour, during which the two completed attaching and outfitting of the first two components of the station, the Russian Zarya module and the US Unity module.