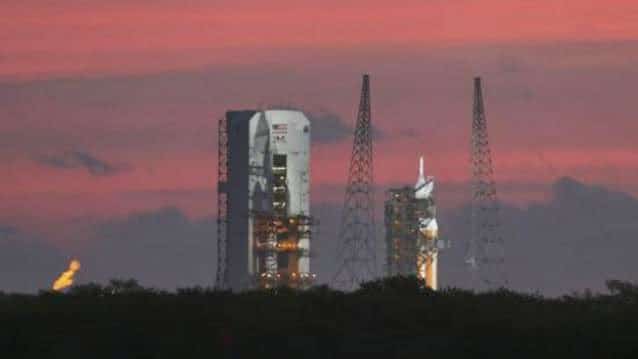 The US space agency’s Orion capsule blasted off on its first journey into orbit, in a key test flight before carrying people to deep space destinations like Mars in the coming years.

The unmanned spacecraft soared to space at 7:05 am (1205 GMT) atop a United Launch Alliance Delta IV Heavy rocket that rumbled and roared as it climbed above the Florida coast at sunrise.
“I think it’s a big day for the world, for people who know and love space,” said Nasa administrator Charles Bolden.

The four-and-a-half hour flight aims to test crucial systems like the heat shield and parachute splashdown.

The launch is the first in more than 40 years of a US spacecraft intended to carry humans beyond the Moon. It has reinvigorated a US human exploration program that has been stagnant for more than three years since the last American space shuttle carried a crew of astronauts to the International Space Station.

The 30-year shuttle program ended in 2011, leaving the United States no other option but to pay Russia to carry astronauts on its Soyuz capsules at a cost of $71 million (roughly Rs. 438 crores) per seat.

Friday’s launch attempt aims to propel the Orion capsule into two loops around the Earth.
The first orbit is to be about as high as the International Space Station, which circles at an altitude of about 270 miles (430 kilometers), but the second would soar 15 times higher, to an apogee of 3,600 miles above the Earth.

Then, the spacecraft is supposed to plunge into the waters off San Diego, California to be retrieved by the US Navy.

An analysis of sophisticated sensors on the capsule should let Nasa know if the temperature inside remained survivable for a potential crew, even as the spacecraft’s exterior heated to 4,000 degrees Fahrenheit
(2,200 Celsius) during its re-entry to Earth’s atmosphere at a velocity of 20,000 miles per hour.

Potential future missions for Orion, which can fit four people at a time, include a trip to lasso an asteroid and a journey to Mars by the 2030s.

Nasa has already spent $9.1 billion (roughly Rs. 56,183 crores) on Orion and the powerful rocket meant to propel it with crew on board, the Space Launch System (SLS).

About $370 million (roughly Rs. 2,284 crores) dollars in equipment is at stake in Friday’s launch.