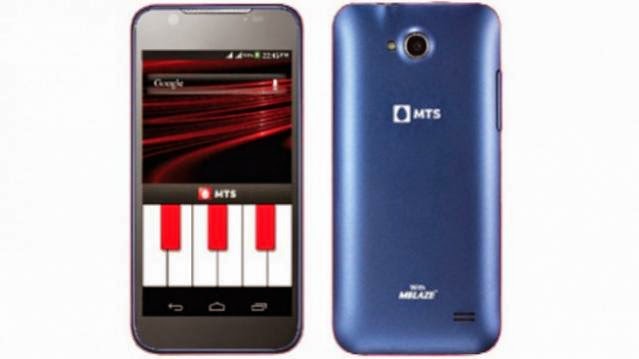 Yet another budget Android

The popular telecom service MTS has launched their latest dual SIM Android smartphone Blaze 4.5. The phone has a price tag of Rs 9,999. You can buy this phone directly from online retailer ThinkOfUs. The retailer is offering a 10 percent cash back offer, which seems to be inspired by Flipkart’s buyback offer for both variants of the Moto G.

The USP of the phone is that it comes bundled with an incredible internet plan. The company is offering whopping 97.5 GB 3G data plan to the buyers of the phone. This plan will be active for one whole year from the activation date.

Coming to the features of Blaze 4.5 Android smartphone, it come pre loaded with Android 4.1 (Jelly Bean) along with MTS’ very own apps called MTS TV and MTS Planet. The phone has a 4.5 inch FWVGA display that boasts of 480×854 pixel resolution.

Under the hood is Qualcomm’s Snapdragon S4 quad-core processor having 1.2GHz clock speed. The processor has been teamed up with 1GB RAM. The primary camera of Blaze 4.5 smartphone is a 5MP snapper located at the rear and comes with features such as auto focus and flash. At the front there is a VGA camera.

Its built-in storage space is 4GB which is expandable up to 32GB thanks to the MicroSD card slot provided in the phone. The phone is powered by a 1600 mAh battery that delivers 4 hours of talk time when fully charged and has standby time of 250 hours. Connectivity features of the phone include Wi-Fi, 3G, Bluetooth and GPS.

With the launch of this phone, MTS is aiming to compete with the likes of other budget smartphones like
Moto G.