Moto G, Moto E, MacBooks, Xbox One, and More in Tech Deals of the Week 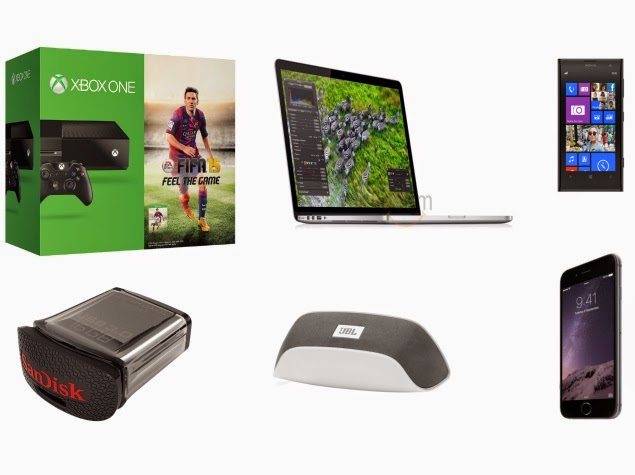 Moto G, Moto E, MacBooks, Xbox One, and More in Tech Deals of the Week

With Diwali fast approaching, the number of gadgets on discount seems to be increasing by the day. If you’re drowning in deals and feel paralysed by choice, don’t worry. We have sifted through the bazillion discounts and offers across e-commerce websites to find you the best tech deals yet again. Read on to save money on your tech purchases.

Flipkart has reduced prices on the Motorola Moto E by 10%. The Motorola Moto G (first generation) has also received a price cut, and now costs Rs. 9,999 for the 16GB variant. The Moto E now costs Rs. 6299. Both these phones can make a very decent gift for your elders this Diwali, especially in cases where you don’t need a very high-end smartphone.

The Moto E comes in a dual-SIM variant, making it a great option for a second device for many. It runs Android 4.4 right out of the box, and features a 4.3-inch display. Flipkart is also bundling data offers with the smartphone. Buyers can get 500MB worth of data on Airtel’s 3G/2G networks for a period of two months on prepaid accounts. For post-paid users, Airtel will offer a discount of Rs. 150 and Rs. 120 per month for two months when customers buy data booster packs. The best part is that you can an additional 10% off in case you pay using an SBI debit card.

The Moto G (first generation) now costs Rs. 3,000 less than the second-generation Moto G. If you have a tight budget this Diwali, and are looking to gift someone a phone in the Rs. 10,000 or less bracket, this is probably one of the most decent smartphones in the market. The Moto G (first generation) also ships with Android 4.4 right out of the box, includes a 5MP primary camera, and a 4.5-inch HD display. The SBI instant discount offer of 10% is also valid on this.

Apple just released its latest desktop operating system OS X Yosemite last night. You can grab a MacBook Air or a MacBook Pro at a discount now, and make use of Yosemite’s latest features. Apple’s MacBook Air 11.6-inch (2014 model) is now available for Rs. 53,691 (regular Rs. 65,900) at Amazon, while the 13-inch variant (2014 model) is now selling at Rs. 69,900 (regular Rs. 82,900). Those are pretty good discounts for MacBooks that will run OS X Yosemite quite well. They also include Bluetooth 4.0 so you can use the Continuity and Handoff functionality along with iOS 8 devices too.
If you still have a thing for spinning drives, the MacBook Pro 13-inch is now available on Amazon for around Rs. 58,200 (regular Rs. 68,900). It is also completely compatible with Yosemite’s latest features. The MacBook Pro 13-inch is powered by a 2.5GHz Core i5 processor, supported by 4GB of RAM, and it ships with a 500GB hard drive running at 5400rpm.

Amazon is exclusively selling the super tiny Sandisk Ultra Fit flash drives in India, and they’re currently available at an introductory price. The SanDisk Ultra Fit 16GB flash drive costs Rs. 525, and the 32GB variant costs Rs. 1060. These flash drives are so small, you might end up losing them if you’re not careful. But the sweetest part is that you can keep them plugged in without worrying about a bulge on one side of the laptop. These flash drives also support the latest USB 3.0 standard so you don’t have to worry about file transfer speeds.

The Microsoft Xbox One is exclusive to Amazon. To promote sales during this festive season, the company had introduced a Rs. 4,000 discount on the standalone console. The festive season sale is just a few days away now, and this is probably a great time to grab the Xbox One from Amazon. The console now costs Rs. 35,990, while it was originally priced at Rs. 39,990.

Microsoft is also giving away Fifa 2015 for free along with the console, in the form of a DLC (downloadable content). The Xbox One is Microsoft’s latest gaming console with an idea of being the “all in one” entertainment device. Sony’s PlayStation 4 is also currently retailing for around the same price in the market, with some offline retailers even offering more discounts. It all comes down to which platform you ultimately prefer.

Paytm is offering huge discounts in the form of cashback when you buy your smartphone from their online store. The Apple iPhone 5s 16GB Gold is now available for Rs. 34,999 (effective price after cashback). The iPhone 5s is currently retailing online for anywhere between Rs. 36,500 to Rs. 41,000. The official price drops are just around the corner, but even those are slightly higher than these current prices. The cashback of Rs. 7,000 you receive can be used to pay bills, pay for pre-paid connections like mobile, DTH, or others.

The Linksys WRT1900AC wireless router is exclusively available on Amazon. The big-fat router is now selling for Rs. 26,999 (previously Rs. 29,999). At first this router may seem a bit overpriced for many, but if you think about it enough you’ll see how it makes all the sense in the world. If you have a number of devices around the house, especially the ones which support the new 802.11ac standard, and you need a high quality wireless network around the house or your office, this is where to get started.

The Linksys WRT1900AC is a dual-band wireless AC router which promises speeds of up to 600Mbps on 2.4GHz and 1300Mbps on the 5GHz frequency. This would be great if you stream media content around the house. The router is powered by a dual-core 1.2GHz ARM based processor. This will take care of all your streaming, multiplayer gaming, and other network-intensive activities. You can even prioritize devices and even websites on your own wireless network, unless your kids start protesting to maintain network neutrality around the house. The router includes 4 external, dual-band detachable antennas to support a large coverage area. It’s a one-time investment that will pay off in the long term.
Price: Rs. 26,999 (regular Rs. 29,999)

Flipkart is selling the Black and Decker HD5010VK9-IN tool kit for Rs. 1,798 this week. At that price, it’s a must-buy tool kit in case you don’t have one already. The kit includes a power drill, wood and masonry drill bits, measuring tape, screwdrivers, and a hammer. The power drill can drill in concrete or wood using specific drill bits. Black and Decker promises an efficient cooling system built inside the power drill, that ensures it doesn’t get burnt easily. The tool kit can be quite handy for basic usage around the house, or a small office.

Croma Retail is selling the JBL SoundFly Bluetooth Speaker for Rs. 3,990 (regular Rs. 5,000). The portable speaker was earlier retailing on eBay and other sites for around Rs. 4,500. The JBL SoundFly Bluetooth speaker plugs into a power socket, and pairs with just about any Bluetooth device. It’s a handy speaker that you can grab, and plug-in to any power socket wherever you move. It includes a 20W power amplification, and an 80dB signal-to-noise ratio. JBL also has a bundled app that you can use to make use of an equalizer on the speaker.

Nokia Lumia 1020 Gets A Decent Discount

Apple’s latest iPhones – iPhone 6 and iPhone 6 Plus – are now officially available in India. Apple’s tight control over pricing ensures that its smartphones stay at a consistent price for a very long period of time. But if you’re willing to be a little patient, and are looking to get a little discount too, you can order your new iPhone 6 or iPhone 6 Plus online.

There’s a 10% cashback offer on Amazon for Citibank card users. The cashback will be in the form of gift cards, and is not directly applicable for iPhone 6 and iPhone 6 purchases. But you can still buy e-gift cards, and then club them together to pay for the iPhone purchase. Maximum cashback is Rs. 2,000 in the form of a gift card which can then be used on accessories like screen guards, or a decent case.

Flipkart is also running a 10% instant discount promotion for SBI debit card users. The offer doesn’t directly apply to the iPhone 6 and iPhone 6 Plus, but one can buy e-vouchers worth the amount, and get an instant discount of 10%, subject to a maximum amount of Rs. 1250 per card, and a maximum of two transactions allowed per card. Remember that you can use a maximum of three gift cards to pay for a purchase on Flipkart.