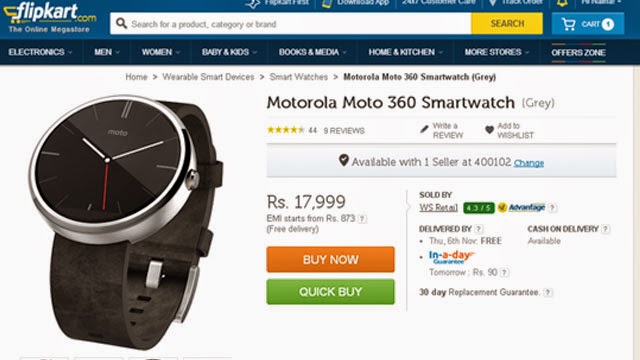 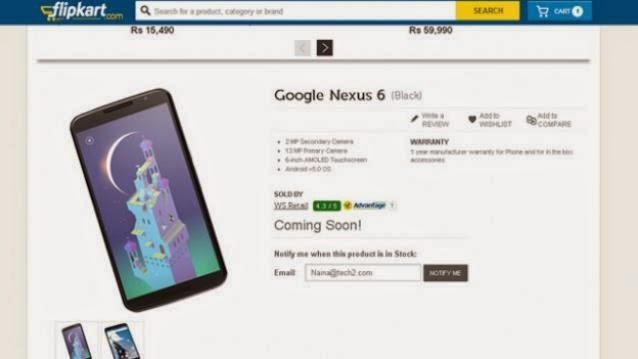 The Motorola Moto 360 is back on Flipkart. After the initial batch was swept off clean, Motorola and Flipkart have now released a fresh stock of the device, which is up for grabs till stocks last. Besides, Flipkart has also listed Google’s latest flagship, Nexus 6, on the site. However, the page reads, “Coming soon.” The Google Play India store doesn’t reveal any details about the Nexus 6, but had already listed 16GB Wi-Fi Nexus 9 model for Rs 28,900.

The Moto 360 sports an elegant circular backlit display with a diameter of 1.56 inches and comes with a 320 x 290 resolution that uses a pixel density of 205ppi. It also gets a layer of Corning Gorilla Glass 3 and is powered by the TI OMAP 3 processor coupled with 512MB RAM. It also gets 4GB internal memory for saving music and photos. For tracking activities, it is fitted with a pedometer and optical heart rate monitor (PPG). The IP67-certified Moto 360 is water-resistant and also supports wireless charging. Read our first impressions about the Moto 360.

As far as specs of the Motorola-built Google Nexus 6 are concerned, it has a 6-inch screen with Quad HD display with a resolution of 1440×2560 which comes to around 493 pixels per inch. It is powered by a 2.7GHz quad-core processor housed in the Qualcomm Snapdragon 805 SoC along with Adreno 420 GPU and is backed by 3GB of RAM. The phone is fuelled by a 3220 mAh battery, which Google claims provides up to 24 hours of battery life. The phone will be available in 32GB and 64GB storage versions.
Motorola is also providing the Turbo Charger feature Nexus 6 which takes 15 minutes to get up to an additional 6 hours of battery life. The rear camera is 13 megapixel with Optical Image Stabilization and HDR+ and the front camera 2 megapixels. The Nexus 6 also comes with the new Android 5.0 aka Android Lollipop.