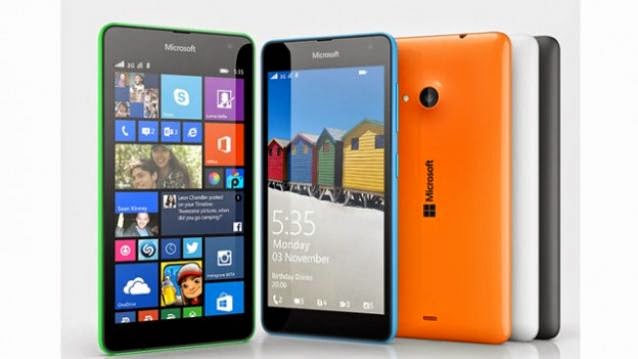 The Microsoft Lumia 535 is the first Microsoft-branded Lumia smartphone

Microsoft has finally taken the wraps off its Lumia 535 smartphone – the company’s first Lumia phone to be released without a ‘Nokia’ tag.

The Lumia 535 dual SIM phone sports a 5-inch display with a glossy plastic back cover, which now carries the Microsoft logo. The physical dimensions of the Microsoft Lumia 535 are 140.2 x 72.4 x 8.8mm and weighs around 146 grams.

The device also features a qHD display with a resolution of 960 x 540 pixels. It is an upgrade from the 854×480 resolution display on the Lumia 530. Microsoft has also enhanced sunlight readability and added a layer of Corning Gorilla Glass 3 to the display.

It is powered by the same 1.2GHz quad-core CPU on a Snapdragon 200 chipset seen on the Lumia 530, though the RAM has been increased to 1GB. Similarly, it now comes with 8GB of internal storage and you can increase this with the card slot that supports cards up to 128GB. It also provides 15 GB of free OneDrive storage

The cameras have received the biggest upgrade: there’s a 5MP camera on the back, but it has autofocus an LED flash. The Lumia 535 also includes a 5MP front-facing camera, which is fantastic for a low-end device. Like most low-end phones however, the Lumia 530 lacked a front camera, so the 5MP front camera on the Lumia 535 is a pleasant addition that is sure to attract young buyers.

The phone runs the latest Windows Phone 8.1 operating system, which includes nifty changes in the features and interface.

It runs on a 1,900 mAh battery, which claims a battery life of 11 hours of calls on a 2G network or 23 days on standby. In terms of the connectivity, the Lumia 535 will support simultaneous 3G on both SIM cards, though there’s no 4G. As you can tell from the specifications, the phone is fairly basic and is aimed at the lower end of the market.