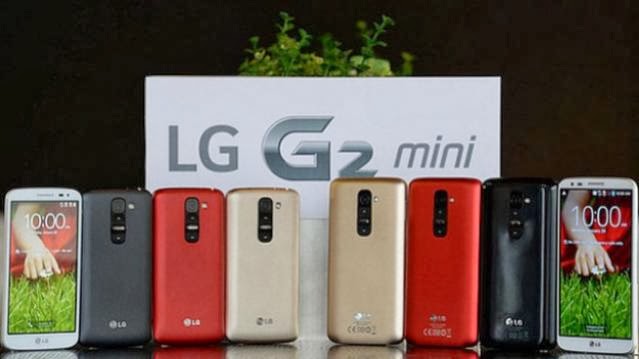 The G2 mini next to its bigger brother

Just as expected, LG has officially unveiled the G2 mini, ahead of next week’s MWC announcement. The company will also be showing off its new L Series III phones at the event. The compact version of LG’s current flagship model is available in single SIM, dual-SIM, 3G, and 4G LTE variants, though there’s no inkling as to which one will hit India. It will be launched in four colour options – black, white, red and gold and carries forward the rear button legacy of the LG G2. The G2 mini will first be offered for sale in March and will come to Commonwealth countries first, followed by the Middle East, Latin America, Singapore, Hong Kong, Taiwan and Europe.

Just like the L Series III phones, the G2 mini ships with the latest version of Android i.e. 4.4 KitKat and will have LG’s custom UI on top along with a bunch of software features, similar to the ones seen in the G2. These include Plug & Pop for popup video playback, various camera modes and a Guest Mode. Dominating the front is a 4.7-inch IPS LCD with a qHD (540×960 pixels) resolution. This is bitterly disappointing as one would have hoped for a 720p display at the very least. Hopefully, the pricing of the device will be in line with the display specs.

The G2 mini will be available in a choice of two chipsets. The LTE and 3G versions have a 1.2GHz quad-core Snapdragon 600 processor ticking within; MSM8926 for LTE, and MSM8226 for 3G, while the another LTE variant  bound for Latin America will have 1.7GHz Nvidia Tegra 4i chipset. All variants get the standard 1GB of RAM, while things change according to variant when it comes to the camera. There’s an 8-megapixel rear camera and a 1.3-megapixel front facing shooter for the variants with the Qualcomm chipsets, while the Tegra 41-powere G2 mini will feature a more high-end 13-megapixel rear camera.  Other specs common to all variants include 8GB of onboard storage with a microSD card slot, Bluetooth 4.0, WiFi (802.11 b/g/n), and A-GPS. The battery capacity is 2440mAh, while the 4G LTE version gets NFC support.