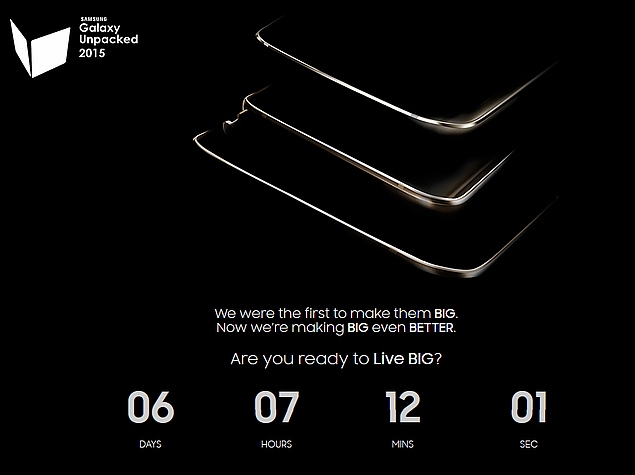 Samsung has scheduled its Galaxy Unpacked event to an earlier date this year, advancing it to August 13 in New York instead of at IFA in September in Germany. Now, as per Samsung Philippines’ new teaser image on the countdown webpage, it seems like the company will be launching three new devices in the market on the date. The teaser image appears to show the long-rumoured Galaxy S6 Edge Plus, the Galaxy Note 5 and a third mysterious larger device, likely to be a tablet.

The teaser image contains the caption, “We were the first to make them BIG. Now we’re making BIG even BETTER. Are you ready to Live BIG?” The company is obviously teasing its next generation flagship phablet in the Note series, which arguably did kickstart the large-screen smartphone revolution.

In the image, the three devices are stacked on top of each other. While the top most device is thought to be the Samsung Galaxy S6 Edge Plus, with the curved edge display and metal frame visible, the one below is thought to be the Galaxy Note 5 facing down with its curved back panel visible and its S Pen stylus slightly popped-out with its signature indentations visible. At the bottom is significantly larger devices, thought to a new tablet. It is speculated to be an 8-inch version of the recently announced Galaxy Tab S2, though Sammobile speculates the launch of a new tablet lineup with curved displays. However, nothing can be said until Thursday.

Samsung Galaxy Note 5 earlier this week was allegedly spotted in some images. The live images showed the phablet featuring an identical front panel to the Galaxy Note 4. The new phablet from Samsung is seen sporting a metal frame and the anticipated S Pen is also visible in the leaked images. Some of the connectivity ports seen in the leaked live images are charging port (Micro-USB port), which previously was rumoured to support USB Type-C, single speaker on the bottom panel, and a headphone jack. The leaked live images also show the new menu for the Air Command feature including options for Action memo, Smart select, Screen write, S Note, Settings, and Instagram. Based on the design, a non-removable battery and the lack of a microSD card slot are also expected. Also, in a separate leak, the Samsung Galaxy Note 5 and Galaxy S6 Edge Plus specifications were tipped via AnTuTu listings.