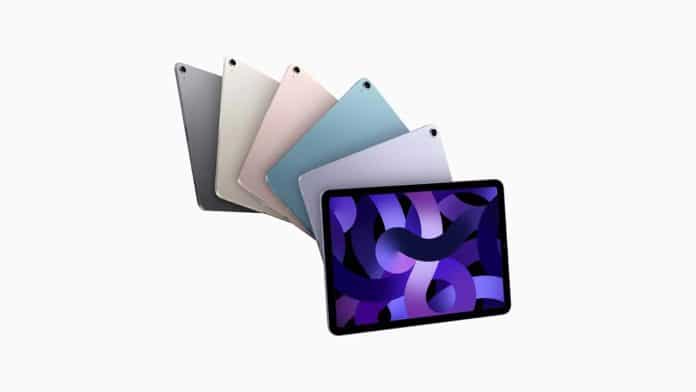 iPad Air 5 launched: The iPad Air 5 (2022) with M1 chip and Center Stage support has been launched: price in India and specifications.

The iPad Air (2022) was unveiled on Tuesday (March 8) at a virtual Apple event, alongside the much-anticipated iPhone SE (2022). The new iPad Air is powered by Apple’s M1 processor, which is currently available on iPad Pro versions and is used in Mac computers. In addition to the improved CPU, the iPad Air (2022) has an enhanced front-facing camera that supports Center Stage, a software feature that debuted on the iPad Pro and iPad mini last year. The fifth-generation iPad Air, on the other hand, retains the same design that debuted on the previous model in 2020.

The iPad Air (2022) is available in Blue, Space Grey, Starlight, Pink, and Purple colours and will be available in 29 countries, including the United States, beginning March 18. The new model will also be available for pre-order in India and other early regions beginning Friday, March 11.

The iPad Air (2022) runs iPadOS 15. It has the same 10.9-inch LED-backlit Liquid Retina display as the 2020 model. The display has a peak brightness of up to 500 nits and supports P3 wide-colour gamut as well as True Tone white balancing. The display also has an anti-reflective coating on top. The new iPad Air also includes Touch ID functionality, which is built into the power/standby button. The M1 processor has been installed in the iPad Air (2022) by Apple. However, just like previously, the business has not provided any RAM specifications.

The M1 processor is said to provide up to 60% quicker CPU performance and two times better graphics performance than the previous iPad Air.

Apple has included a 12-megapixel Wide back camera on the iPad Air (2022), which is the same as what was available in the previous edition.

The iPad Air (2022) has storage capacities of 64GB and 256GB. 5G (optional), Wi-Fi 6, Bluetooth v5, GPS/ A-GPS, and a USB Type-C connection are among the connectivity choices. An ambient light sensor, a barometer, and a three-axis accelerometer are among the sensors onboard.

Apple Pencil (2nd generation) compatibility has been added to the new iPad Air, allowing users to create sketches while on the go. There is also support for Magic Keyboard, which uses a floating design and built-in touchpad on the detachable keyboard to provide a notebook-like computing experience.

Regarding battery life, Apple states that the iPad Air (2022) has an “all-day battery life.” However, specific usage data have yet to be announced.