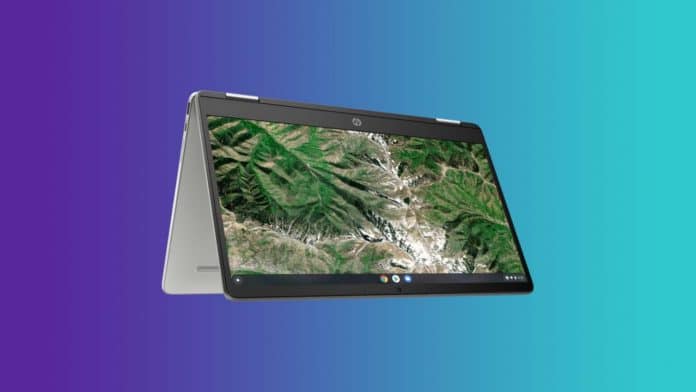 In India, HP has released the Chromebook x360 14a with an AMD processor. This is the newest addition to HP’s Chromebook lineup in the nation, which already comprises the HP Chromebook 11a and HP Chromebook 14a. According to the firm, this Chromebook will be suitable for children aged 4 to 15.

Specifications for the HP Chromebook x360 14a

The Chromebook x360 14a has a 14-inch HD touchscreen anti-glare display with a resolution of 1366 x 768 pixels, a maximum brightness of 250 nits, and a 45 percent NTSC color gamut. The AMD 3015Ce dual-core CPU with AMD Radeon graphics is featured here.

The Chromebook comes with 4GB of DDR4 SDRAM and 64GB of eMMC storage, which can be expanded to 256GB with a microSD card. When you buy the laptop through HP, you’ll get a year’s worth of Google Drive storage for free.

The Chromebook x360 14a comes equipped with a 720p HD webcam to aid video calls. Wi-Fi 5, Bluetooth 5, two USB-C ports with support for USB PD and DisplayPort 1.4, a single USB-A port, and a headphone jack are among the other connection and port choices available. On a single charge, the Chromebook’s two-cell 47Wh battery provides up to 12.5 hours of use. In addition, it takes 45 minutes to charge to 50%.

Mineral Silver, Ceramic White, and Forrest Teal are the color options for the HP Chromebook x360 14a. It is available on Amazon India for a starting price of Rs. 32,999. During the present Amazon Great Indian Festival sale, you can get one for Rs. 31,490.