Google Pixel Release: A Roundup of All Announcements From Tuesday’s Event 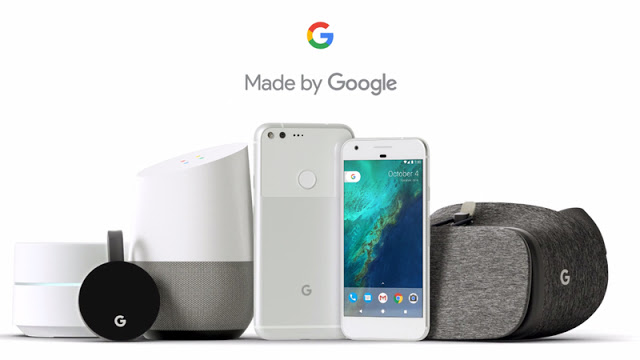 At the Made by Google event held inside a small venue in San Francisco on Tuesday, Google finally took the wraps off the much talked-about new smartphone lineup, among other things. Retiring its popular Nexus line of smartphones that gave the world stock Android for a reasonable price, taking up the mantle are two ‘Pixel’ phones – a sub-brand borrowed from the premium Chromebook Pixel and the Pixel C tablet introduced last year. So without further ado, let’s deep-dive into everything that was shown off on Tuesday.


Google Pixel and Pixel XL
There are many similarities between the two smartphones, so let’s start with the differences first. The Google Pixel has a 5-inch full-HD (1080×1920 pixels) display. Dimensionally speaking, at 143.8×69.5×8.5 mm and weighing 143 grams, it’s a tad bigger than the 4.7-inch screened iPhone 7. That resolution and screen size translates to a pixel density of 441ppi, which is a little higher than last year’s Nexus 5X. Just to remind you, the Nexus 5X had an LCD display, whereas the Pixel has an Amoled display, just like its older sibling, which should result in rich contrast and deep black levels.

The other difference is in battery capacity, with the smaller Pixel’s measuring in at 2770mAh. To put things into perspective, last year’s 5X had a slightly smaller 2700mAh battery. Due to the slightly bigger battery, it boasts a longer talk time and standby time of 32 hours and 552 hours respectively.

As for the Pixel XL, as the name suggests, it has a bigger display when compared to the Pixel, at 5.5 inches. It is, although, smaller than the 5.7-inch display on last year’s Huawei Nexus 6P, and certainly more reasonably sized than the 6-inch Nexus 6 from a year before that. For comparison, its 154.7×75.7×8.5 mm dimensions are more or less comparable to an iPhone 7 Plus, which also sports the same 5.5-inch sized screen. But, at 168 grams, the Pixel XL isn’t going to be as heavy as the bigger iPhone, which weighs about 20 grams more.

The bigger size also means a bigger battery, as the Pixel XL packs in 3450mAh of it. Incidentally, that’s the same capacity as last year’s Nexus 6P, although the Pixel XL boasts of higher battery life than the former. For instance, the Nexus 6P can do up to 10 hours of Internet or video playback, while the Pixel XL suggestively can run up to 14 hours for the same tasks.

Now that the differences are out of the way, let’s talk about the highlights that both these phones share. For starters, they both have a unibody aluminium construction with a unique glass window at the back. Having said that, their resemblance to iPhones is uncanny at certain angles. they’re powered by Qualcomm’s current fastest Snapdragon 821 chip, which has got two powerful cores pumping muscle at 2.15GHz, while two energy-efficient cores running at a slower 1.6GHz. They also receive 4GB of RAM, which isn’t exactly as chart-beating as the phones with 6GB RAM we’re seeing these days, but it’s more RAM than last year’s Nexus phones. Both phones have their screens protected by Gorilla Glass 4, which again is not as bleeding-edge as Gorilla Glass 5, like on the Galaxy Note 7.

Talking about the cameras, on paper they do not look all that different from the units on the Nexus 6P or Nexus 5X. Both Pixel phones sport the similar-sounding 12.3-megapixel sensor with an f/2.0 aperture, the same 1.55-micrometer pixel size. But deeper inspection reveals a Sony IMX378 camera sensor, which is a change from the Sony IMX377 ones used in the Nexus 6P and 5X.

Having said that, Google boasts the Pixel phones to have the best cameras in a smartphone to date. Its claim to this fame is based on the DxOMark, a popular mobile photography analysis website, which rates the Pixel phones higher than the Galaxy S7 Edge and the iPhone 7. The phones boast of HDR+ mode with zero shutter lag. HDR combines multiple photos taken at different exposures into one for better clarity.

The front camera retains the same 8-megapixel resolution. This year too, optical image stabilisation (OIS), which helps in capturing less jerky video and better low-light photography, is given a miss. Instead, there’s a gyroscope-based image stabilisation in the new Pixel phones, which according to the demo on the stage, should give comparable results.

Both phones have the ‘Pixel Imprint’ fingerprint scanners at the back, like the Nexus phones of 2015.

Interestingly, you can now swipe down on the scanner when the phone is unlocked to drop down the notification tray. Both run on the latest version of Android Nougat, version 7.1, something that even the Nexus phones don’t run at the moment (they’re on Android 7.0). Next, both also sport the reversible USB Type-C port like previous Nexus phones (that now supports USB 3.0 for faster transfer speeds).

They also have similar fast charging abilities that will put “up to 7 hours worth of juice in 15 minutes”. For those keeping count, the Nexus 6P was said to get 7 hours of use with 10 minutes of charge. While last year’s Nexus phones were bundled with 15W chargers, while Pixel phones this year come bundled with up 18W chargers. Unfortunately, fast charging on the Nexus 6P and 5X wasn’t compatible with Qualcomm’s Quick Charge, an open specification which companies like Samsung and Motorola have referenced, making them intercompatible. Unfortunately, it seems that this year too, you’ll have to stick to chargers that come inside the box, if you want to rapidly charge either of the Pixel phones. Also, speaking of ports, both phones do have the standard 3.5mm audio output jack, and they boast of it rather proudly.

Both phones come in either 32GB or 128GB of inbuilt storage variants. As is somewhat of a tradition with phones by Google to drop features from its predecessor devices, the Pixel and Pixel XL come with a single bottom-firing speaker. This is a bit of a bummer, considering the Nexus 6P and even new phones like the iPhone 7 have stereo speakers.

In India, the Pixel phones are going to be sold for a starting price of Rs. 57,000 at online and offline stores including Flipkart, Croma, and Reliance Digital. At launch, they’re said to come with lucrative exchange offers and no-interest EMI schemes. With respect to after-sales, Google showed off a customer support app baked into these phones, with screen-sharing abilities. Indian customers will get over-the-counter support at 54 walk in service centres across over 30 cities in India.

Exclusive Pixel Features
The Pixel phones are receiving special treatment from the search giant, in a bid to make their value proposition stronger. Starting off is something we’d heard via the rumour mills months ago — unlimited full resolution photo and video backup. Google Photos was launched in May last year which allowed unlimited backups for any Android and iOS device but the images were downscaled (although not very noticeably). You can also easily free up space on your phone in a few clicks, as the Photos app will delete media on your phone that’s already backed up.

Google Assistant
The next feature that Pixel phones will get first access to is Google Assistant. For years, Google has charmed people with its class-leading voice recognition and helpful knowledge cards. But talking to Google never felt like talking to an actual assistant. In a bid to make it more personalised, humanised, and conversational like Apple’s Siri, Google Assistant now takes centre stage on Pixel phones.
It’s accessible by long-pressing the home button on any screen (an action that used to bring up Google Now on Tap). You can get tasks done, find what you’re looking for and more by talking to Google Assistant instead of just speaking ‘commands’ to your phone.

Google also gave a sneak-peek into something that will bring it at par with Siri’s third-party app integration functionality in iOS 10, with Actions on Google. In the demo, an example of booking an Uber was shown, something that Siri can already do. Developers will have access to these APIs in December this year.

Daydream View
Daydream is a brand of VR related products in the Google universe. The Daydream View is an elegantly-designed VR headset made by the company itself. It’s crafted out of appealing fabrics for a comfortable fit. It works with the two Pixel phones as well as other Daydream-ready phones. It’s designed for people with spectacles to be able to use it comfortably. It is priced at $79 in the US. There’s no word on Indian availability or pricing yet.

Google Wifi
Google Wifi takes a page out of Apple’s Airport line of home routers, by creating good-looking compact Wifi routers that are easy to setup and use. If you have a big house, you can put multiple Google Wifi devices in different areas and they’ll extend the range. The ‘smart’ router boasts of a feature called Network Assist, that automatically avoids Wi-Fi congestion and connects to the closest device to get adequate range. Lastly, a Google Wifi app on your smartphone can let you moderate Internet access to other devices and let guests use your Wifi network easily. Google WiFi router starts at $129 in the US with a pack of three for $299. No word on India pricing or availability.

Chromecast Ultra
The popular video streaming device, Chromecast, is getting a seasonal update making powerful enough to support streaming in 4K resolution (a.k.a Ultra HD) and has HDR support. With bandwidth improving around the world such that streaming Ultra HD over the internet is not a distant dream anymore, this is a fair addition. Many videos on YouTube are available for streaming in 4K and Netflix also enables 4K for some of the content in its highest-tier subscription. Another new feature to this Chromecast device is the presence of an Ethernet port, for wired internet connectivity. The 4K-ready Chromecast starts selling at $69 in the US.

Google Home
First unveiled at this year’s Google I/O, Google Home is finally ready to ship. Much like the Amazon Echo, Google Home is a smart speaker that can sit anywhere in your house, and can be controlled via voice. You can ask it to perform actions like setting reminders, looking up information etc, similar to the Google app on an Android or iOS device.

With the aforementioned Google Assistant built into this device, the experience is more conversational. Google Home can also work in tandem with a Chromecast, where you can say something like “Play Last Week Tonight on my TV” and a stream will begin without having to reach for your phone. It can also talk to other IoT devices like smart bulbs to process commands like “turn on the lights”. The far-field microphones on Google Home are tuned for being able to capture voice commands from afar.

Being a speaker, it can also play music from various music streaming services like Spotify, Google Play Music, YouTube Music, Pandora and TuneIn (a majority of which aren’t available in India right now). The Google Home will sell for $129, undercutting Amazon Echo’s current $179 price tag.

So there you have it. We will be sharing our thoughts on each of these devices as we get to spend more time with them. Until then, hope you’ve had a good dose of everything Google announced at its event.