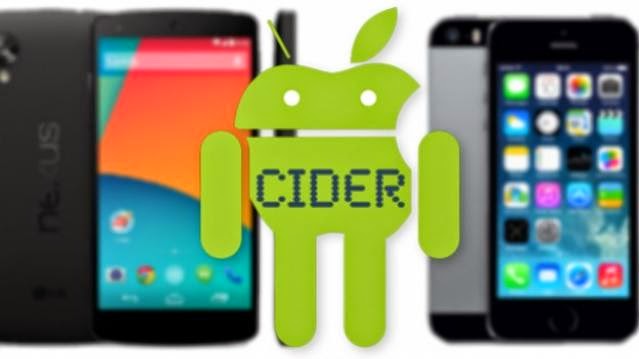 While we can debate endlessly about which smartphone OS is the best or the most advanced, there can be no argument on the fact that Apple’s iOS does have a bit of an advantage when it comes to apps.

Apple got the jump on Google when it comes to apps for the smartphone platform and Android had to play catch up in this department for a long time. iOS held exclusivity for apps such as Instagram, IFTTT and others for a long time. Now, the Play Store has more apps than the App Store and sees more downloads too. Android’s huge market share has helped narrow the gap. It also helps that developers for Android get significantly more freedom to develop what they want than they would on iOS, due to the fairly relaxed publishing policy.

But for many smartphone junkies, the dream still is to have a device that can run iOS as well as Android apps. Android users want a taste of iMessage or while iOS users want to be able to customise their phone’s UI. It could soon be possible with Project Cider.

Developed and designed by the Department of Computer Science at Columbia University, Cider is an OS compatibility architecture capable of simultaneously running iOS and Android apps. Cider is not a dual-boot solution, instead the members of the project say, “Cider runs domestic binaries, those developed for a given device’s OS, the domestic OS, and foreign binaries, those developed for a different OS, the foreign OS, together on the same device.”

This allows foreign apps (in this case iOS, because the concept was demoed on a Nexus 7) to access the host device libraries, for proprietary software and hardware interfaces such as 3D acceleration hardware. This means iOS photography apps can make use of the camera on the device, without having to run virtualization software.

“Users can interact with iOS apps using multi-touch input, and iOS apps can leverage GPU hardware to display smooth, accelerated graphics. Our microbenchmark and app measurements show that Cider imposes modest performance overhead, and can deliver faster performance for iOS apps than corresponding Android counterparts on Android hardware. The faster performance is due to the greater efficiencies of running native iOS code instead of interpreted bytecode as used by Android.”

The developers also say that apps can tap into GPS and location services on a device. This was enabled after the first paper was released.  Project Cider published a proof-of-concept video, which shows the UI without any 2D hardware rendering. The clip shows Passmark running a 3D benchmark with full access to the host hardware’s rendering capabilities.


While the video shows the apps running simultaneously, we don’t expect a market-ready version of this compatibility architecture any time soon. There are likely to be IP and copyright infringements in the process, but the proof of concept shows that it’s possible to merge the biggest smartphone OSes in the world.