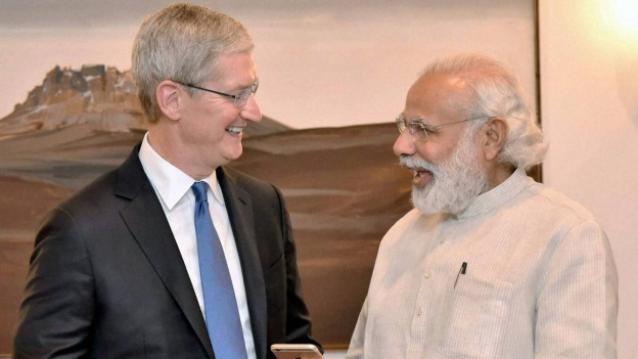 In a fresh insight into Apple’s future plans for India, CEO Tim Cook discussed with Prime Minister Narendra Modi the possibilities of manufacturing and retailing in the country as the two met in New Delhi on Saturday.

On his part, Modi explained his Digital India initiative and identified its three key objectives as e-education, health and increasing farmers’ incomes. “Modi sought support from Apple in these objectives,” a statement from Prime Minister’s Office said.

During the meeting, Cook, 55, appreciated the breadth of young talent in India, saying the “youth have significant skills which Apple would like to tap”. He mentioned the immense potential for “app-development” that exists in the country and elaborated on the Map Development Centre that Apple is setting up in Hyderabad. Hailing Modi’s initiatives in “ease of doing business”, Cook also launched an updated version of the “Narendra Modi Mobile App”.

In an exchange of tweets later, the two praised each other.

Cook replied: “Thanks @narendramodi for a great meeting. Already looking forward to next visit to India. Best wishes on the app!”

“I am delighted to share that Tim Cook launched an updated version of the ‘Narendra Modi Mobile App’. Thank you, Cook,” said Modi in his tweet.

“I urge you to have a look at the new feature ‘My Network’ that empowers you to contribute on lively and enriching forums where you can share your ideas and deliberate with others. You will also enjoy the daily tasks on the app,” the prime minister added.

They also deliberated on issues regarding cyber security and data encryption. Modi encouraged Cook to help the global community to cope with the challenges of cyber crime.

In an interview with an Indian TV channel on Friday, Cook asserted that he was looking at India holistically and Apple was “here for the next thousand years” — a comment that was hailed by Communications Minister Ravi Shankar Prasad at an event later. “I complement Apple chief executive for a public commitment of one thousand years in India. We are ready to work together,” Prasad said.

Cook also met Sunil Mittal, chairman of Bharti Airtel, one of India’s leading telecommunication companies which was the first to launch 4G in India and set to offer the service countrywide.