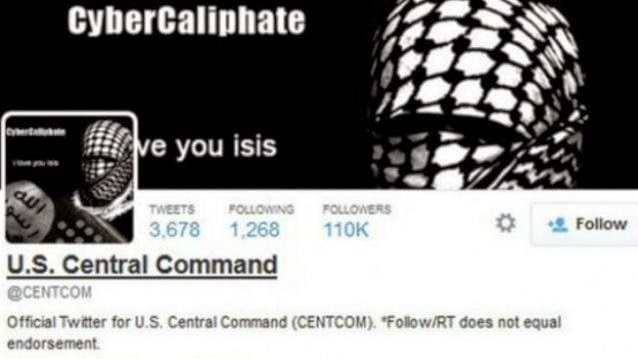 Screenshot of the US Central Command’s Twitter feed after it was hacked.

The “CyberCaliphate” hacking group that attacked a Twitter account belonging to the Pentagon on Monday was founded by a Briton who was once jailed for hacking the personal address book of former British Prime Minister Tony Blair, according to government sources and private sector security experts.

US and European government sources said investigators strongly believe that Junaid Hussain, 20, was the leader of CyberCaliphate, though they do not know if he was personally involved in hacking the Twitter and YouTube accounts of the US Central Command, which oversees military operations in the Middle East.

In 2012, Hussain was jailed for six months for stealing Blair’s address book from an email account maintained by one of Blair’s advisors. Hussain pleaded guilty to putting details of the address book online and making hoax calls to a counter-terrorism hotline.

Hussain, who lived in Birmingham, England, moved to Syria sometime in the last two years, according to British media reports.

US and European investigators said they are investigating whether Monday’s attack on the US Central Command’s Twitter and YouTube accounts was launched from Syria, though they have not finished examining the technical evidence. The sources spoke on condition of anonymity.

Pentagon spokesman Army Colonel Steve Warren has called the cyberattack “inconvenient” but stressed that no sensitive or classified information was compromised by the hackers, who claimed to be sympathetic toward the Islamic State militant group being targeted in American bombing raids.

Investigators believe that Hussain was the main individual behind a Twitter account that operated under the pseudonym Abu Hussain al Britani, according to the sources. That account was linked to CyberCaliphate after the group last week claimed responsibility for hacking the Albuquerque Journal in New Mexico and WBOC, a Delaware television station. Neither the Albuquerque Journal nor WBOC responded to requests for comment.

The Abu Hussain al Britani account has been suspended as of Tuesday. One of the government sources said it was possible that other people besides Hussain used that account.

She said the CyberCaliphate first surfaced when it published a “recruitment announcement” on 11 September, 2014.

According to Kassirer, Hussain’s British wife said on her Twitter account last week that her husband had been killed in a drone attack. US and European security officials said there was no confirmation that Hussain was dead.