Apple loyalists queue up for the new, larger iPhone 6 models 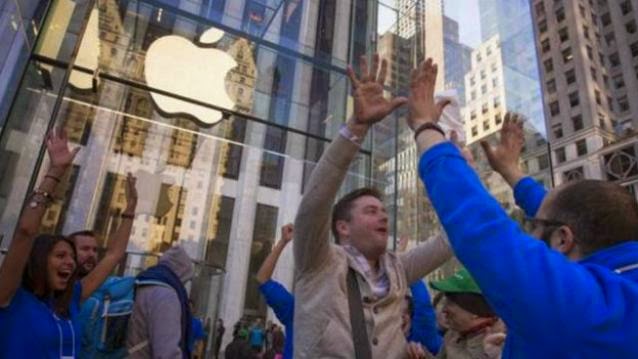 Apple’s latest phone lured throngs of gadget lovers, entrepreneurs and early adopters to its stores in New York, San Francisco and other cities around the world in the latest sign of strong initial demand for the new, larger generation of iPhones.

Even the night before the phones’ Friday debut, nearly 70 people were waiting in line in front of the Apple store in downtown San Francisco. Some eager to get their hands on the iPhone 6 and iPhone 6 Plus, which feature larger screens and longer battery life, had been there since the night before.
At the Apple store on Fifth Avenue in New York, the line of would-be buyers stretched for more than 10 blocks. Apple employees led them in a New Year’s Eve-style countdown to herald the store’s opening at 8 a.m. EDT (1200 GMT) and high-fived customers as they entered the glass cube leading to the underground store.

In Atlanta, police were called in before 5:30 a.m. to assist with crowd control at one mall location because of worries about trampling, the Atlanta Journal-Constitution reported.
While it has become customary for swarms of people to greet Apple product introductions, Friday’s long lines were still a sign of healthy demand for the new models. The phones drew more than 4 million preorder requests in the first 24 hours on Sept. 12, more than double the 2 million for iPhone 5s in the same period two years ago.

The enthusiastic crowds gathered despite signs that Apple’s legendary “cool factor” may be dimming with some consumers, according to a recent Reuters/Ipsos poll.

Sales predictions from investors tend to be optimistic. Apple watchers tracking the early sales of the new iPhones note that the precise number of units sold in the first weekend will depend on the strength of the supply chain. A Friday report from Barclays cited the long lines outside stores as a positive sign for demand, suggesting that combined first-weekend sales for the new phones could rise as high as 11 million units.

Despite the high demand, sales could be choked by a limited number of iPhone 6 Pluses available immediately. A T-Mobile US Inc spokeswoman said Friday that demand for the new phones was “tremendous,” but the larger model would not be available yet.

Paul Terrebonne, a 26-year-old cook who had preordered his space-grey iPhone 6, said the size of the new devices had been enough to lure him back to Apple from his previous phone, a Motorola Moto X.
“It’s all about screen size, plus I missed the iPhone’s camera,” he said, adding that he had shunned the iPhone 6 Plus because it was “a bit too big.”

The launch attracted buyers from farther afield. Flavio Gondim, a 40-year-old Brazilian public sector employee, said he was buying an iPhone 6 in New York because “back home these are, maybe, 50 percent more expensive.”

In Asia, many who lined up to buy the new phones in Singapore, Hong Kong and Australia said they planned to re-sell the devices in China, where regulatory hurdles are holding up the new phones’ debut.
It remains to be seen whether the renewed iPhone mania will extend to Apple’s other big product introduction, the Apple Watch, which will not be available until early next year.

Raj Kaur, who was comfortably waiting in line in San Francisco in a folding chair, said she did not plan to repeat the vigil for the new watch.

“I’ll wait for the second edition,” she said, “when they’ve worked out the kinks.”