Apple iPhone 7 vs Samsung Galaxy S7 vs OnePlus 3: The Battle of Flagships 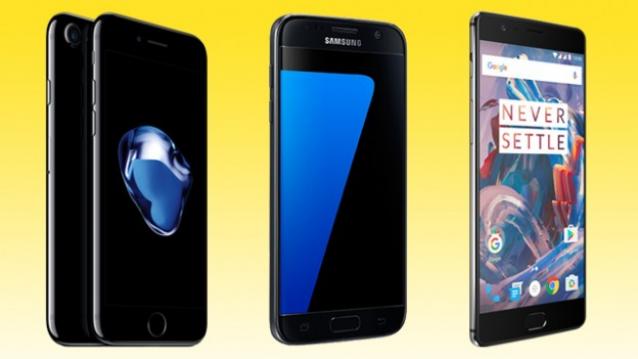 Apple just announced the latest and its ‘best iPhone ever’ last night at the Bill Graham Civic Auditorium in San Francisco. The latest flagship by the company will replace the Apple iPhone 6S while competing with the competition. The company claimed that this is the fastest and the best iPhone that they have ever made and this will blow competitors out of the water. The company also launched the larger Apple iPhone 7 Plus along with the iPhone 7.

Apple iPhone 7, along with iPhone 7 Plus, will be a tough task for the company to rejuvenate growth as it saw stagnating sales for the first time in years. Regardless of the task at hand, this year the iPhone saw cold muted reception, and there was a stream of leaks with lack of chatter around the device. In fact, according to reports, people are already looking forward to the Apple iPhone 8 after the launch, and only 50 percent people are interested in upgrading to Apple iPhone 7.

The iPhone 7 is an incremental update to the iPhone series and does not offer any substantial reason to upgrade from the previous model, iPhone 6S or iPhone 6S Plus. We will have to see the real world performance of the device, though. Apple is known for the highly optimised software that does not need a massive amount of RAM for smooth performance. The device does provide bang for the buck being invested for people on Apple iPhone 5, iPhone 5S or even iPhone 6.

Looking at the competition, Samsung Galaxy S7 stands tall in the spec-to-spec comparison, but the OnePlus 3 still seems the best bet regarding ratio between the specs and the monetary investment involved. Samsung Galaxy S7 was praised for the brilliant camera performance along with its processor performance. The thing that works out for OnePlus apart from details like Quick Charge, Type-C, and the presence of 3.5mm headphone jack, is the price. The consumer gets comparable specs to other premium smartphones that cost twice as much.