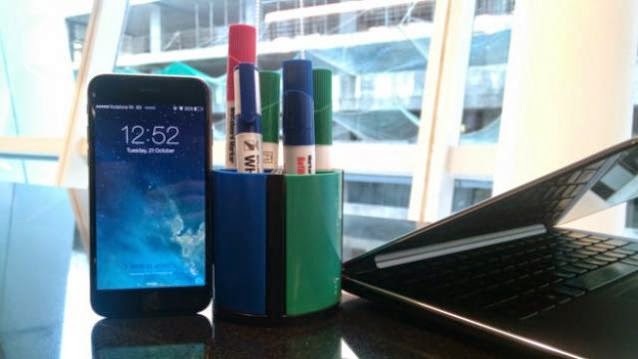 A lot has been said and read about Apple’s latest smartphones. Whether it’s the web going berserk with speculations before the pre-launch, reports of the iPhone 6 bending inside pockets, iOS 8 snafus or Apple breaking records with its new iPhones – the iPhone 6 has been in the limelight for reasons both good and bad.

Now that the phones have finally made it to Indian shelves, we finally had the chance to see for ourselves what the new iPhone 6 really has in store and what’s it like to use.

The iPhone 6 is the smaller of the two iPhones, sporting a 4.7-inch display in contrast to the 5.5inch iPhone 6 Plus. We got our hands on the 16GB iPhone 6 and here’s what we think of the device.

The iPhone 6 sports a larger 4.7-inch screen that’s now sharper than ever before. The 4.7-inch Retina HD screen now houses more pixels with a resolution of 1334 x 750, so the screen does look brighter if not sharper than the iPhone 5s. Viewing angles remain good enough for tagging a friend along as you watch a movie. In addition, there’s a polarised layer that really does make the screen more readable when it gets too bright. The larger screen also makes reading and typing a lot easier compared with the smaller 4-inch iPhones. 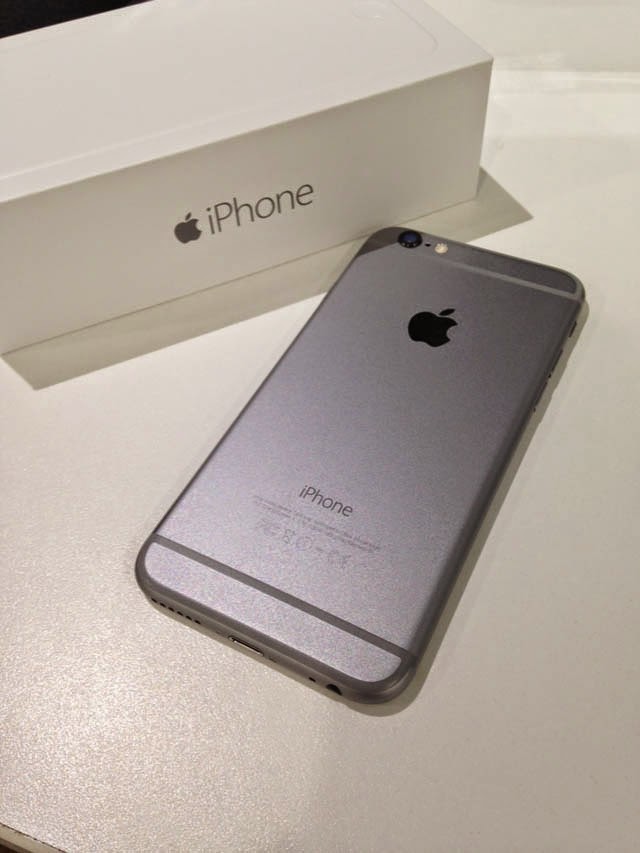 Apart from the enlarged screen, there’s a drastic change in the design as well. With the iPhone 6, Apple has moved away from the straight-edged design to a smoother, curved-edged one. At 7.1mm thick, it’s also the thinnest among all the previous iPhones. The svelte curved edges and thin chassis definitely make the iPhone 6 great to look at, but sadly, also more slippery than the iPhone 5s. In a lot of ways, holding the iPhone 6 feels like holding an iPad, thanks to the slim, curved sides.

The edge-to-edge display gives to more viewing space without adding to weight and size with a thick bezel. So when you’re looking at the phone from the front, all you see is the 4.7 display with an inconspicuous bezel running along the sides.

The phone is fully metal and exposes the antenna – coloured to go with the grey aluminium back. The camera protrudes slightly, so it does not sit evenly on its back.

Despite the larger screen size, it’s easy to use in one hand. The button to lock the display has now been moved from the top to the right edge of the phone, so that your fingers don’t have to reach out too far. The volume buttons are recessed and the ringer switch is now smaller to make the phone look as skinny as possible. It’s also lighter now, which some may or may not like. 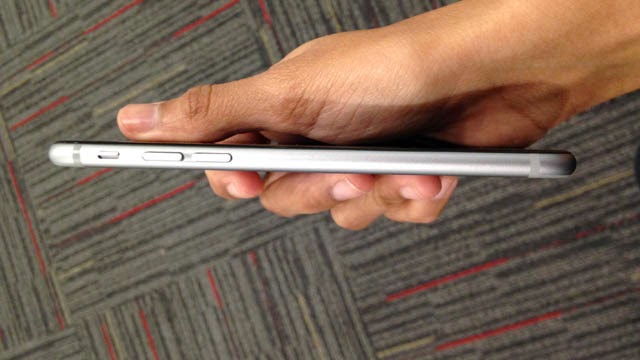 The iPhone 6 might not be ‘bendy’, but the metal does feel weaker than the older iPhones. Otherwise, the improved design and screen makes the iPhone 6 a stunning device to look at, while maintaining the iPhone’s signature understated look.

If you are already an iOS user, you’ll find the iPhone 6 pretty simple to use. iOS 8 comes with new features including support for a range of widgets, more control over notifications and better email and web-browsing features. 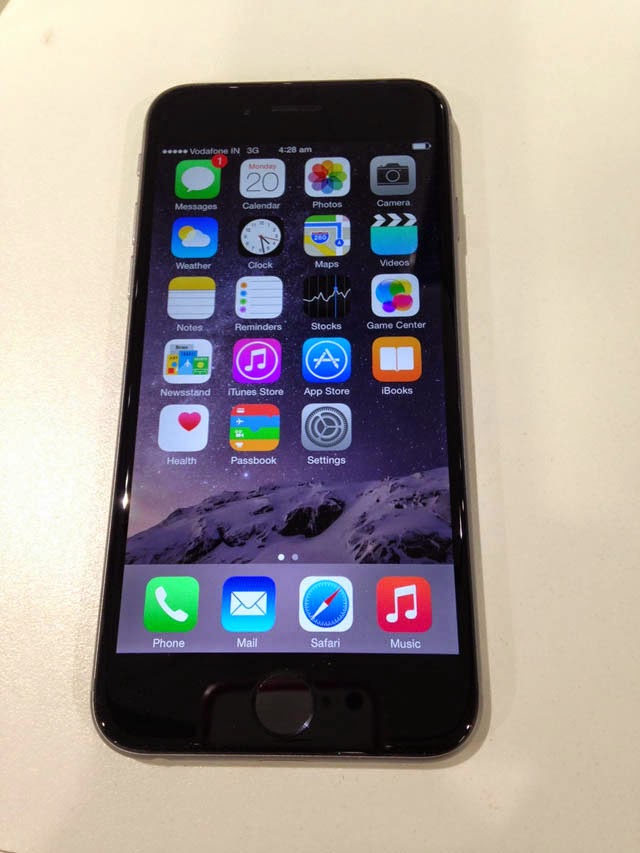 Setting up the phone is easy, especially if you have a backup of your data saved from an iPhone or an iPad device. You can choose from the standard viewing mode and zoomed mode. The latter increases the size of icons, text and images for easier reading.

Apple has added extra features in order to improve the accessibility in the larger iPhone 6 and 6 Plus models. iOS 8’s ‘Reachability’ features moves the page down by double-tapping the Home button. This should help those with smaller hands to select options that sit on top the screen. You can also switch to the previous and next pages when browsing the web on Safari by swiping your finger across the screen.
Like the iPhone 5s, the fingerprint scanner works well and is useful for quickly unlocking the screen and authorising payments on the App Store.

There’s a significant improvement in the camera of the iPhone 6. While the resolution is the same at 8 MP, pictures look more detailed and the camera can shoot moving objects in a much better way. This is due to on-sensor phase detect sensors, called focus pixels, it focuses on subjects almost instantly even if there are many elements in the scene.

It has a slow-motion mode, which lets you capture videos at either 120 frames per second or 240 frames per second. In addition, iOS 8 adds the time-lapse feature that lets you get creative with your videos.
The front camera is slightly better than its predecessor, with greater detail in the shots and better results in low light.

The new 64 bit A8 processor keeps the iPhone 6 running at a quick pace, though we didn’t feel a drastic improvement from its predecessor. The phone is still pretty nippy to use and should be able to take on heavy games and apps with ease.


Out of the 16GB, you get 11.3 GB of free space, along with 5GB of online storage on iCloud. As with all iPhones, you can’t add to the storage with a microSD card, so if you need more space you will have to choose from the 64GB or 128GB models.

The iPhone 6 packs a larger 2,915 mAh battery, which claims to provide up to 14 hours of call time over the 3G network. This is not great by 2014 standards, but is still better than all its predecessors and should be enough to get you through a day’s work.

If you are looking for a device that’s truly premium and love all things Apple, the iPhone 6 is for you. Apple has included some useful improvements with a larger screen size and battery, a better camera and is overall, extremely smooth in operation. First-time iPhone users will welcome the large display and the simplicity of the iOS operating system.

But once you are done swooning over its looks, you’ll find that it’s not a huge leap from the predecessor, as there’s no distinguishable difference in the screen quality and speed of the device. iOS 8, which brings a majority of features in the new iPhone 6, is available even on the the iPhone 5s. Apple Pay – touted as one of Apple’s biggest features in the iPhone 6 and 6 Plus will take a few years before you can use it in India. So if you already own the iPhone 5s, there’s little reason to upgrade to the iPhone 6.

Also, the iPhone 6 is not exactly feature-rich in comparison with other premium smartphones such as the Samsung Galaxy Note 4, which comes the S-Pen for taking notes, the waterproof Sony Xperia Z3 or the Blackberry Passport that features an innovative keyboard. Apart from the Touch ID fingerprint sensor, there are not many frills in the iPhone 6, which might disappoint some buyers who’ll be shelling out a premium.