Apple iPad comparison: The 9.7-inch iPad Pro to go on sale 7 April, but is it the iPad for you? 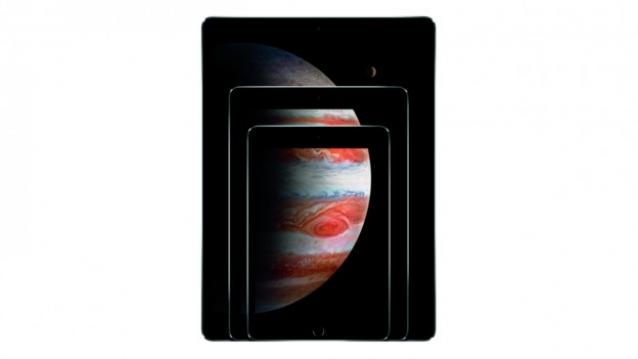 This handy guide should clear everything up and help you make a better decision.
Currently, Apple has the following iPads on sale:

The iPad mini 3 and the iPad Air are also available in the market and unless you’re getting a ridiculously good deal on them, don’t bother. 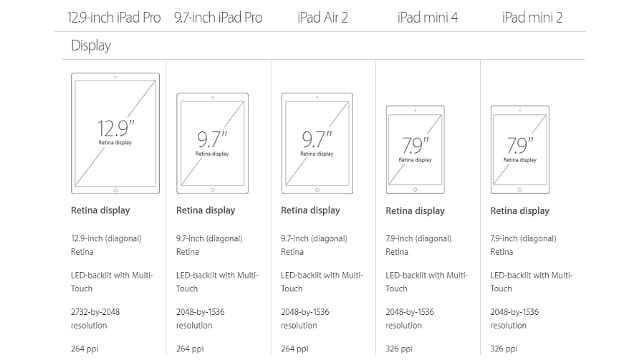 First, you need to determine the size of the device you’re comfortable with, namely, 7.9-inches, 9.7-inches or 12.9-inches. From experience, I prefer the 9.7-inch version myself, but your mileage may vary.

The iPad Mini is comfortable to use for reading and, in our experience, little else. It is cheaper than the other options though, which might appeal to many. The iPad Mini 2 starts at Rs 18,000 and the Mini 4 starts at Rs 28,900. If budget is the sole concern, take the Mini 2. 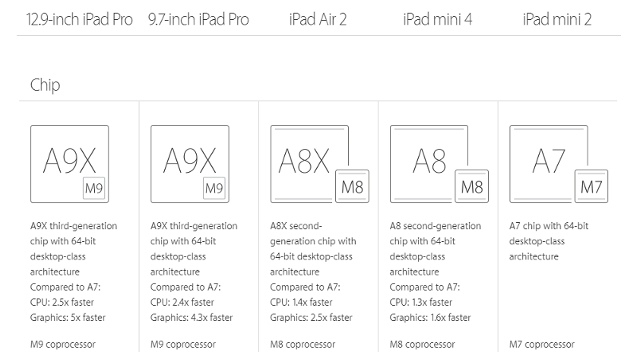 iPad Mini 2: Small and Cheap
The iPad Mini 2 features an A7 CPU (the same as on the iPhone 5S) coupled with an M7 co-processor. You get a Retina display (2048 x 1536) and performance is adequate for most use. The A7 is very old so you might notice some stuttering. You only get 1GB RAM and a 5MP rear camera. That said, this is the cheapest iPad on offer.

iPad Mini 4: Great display and improved performance
The iPad Mini 4 features a faster A8 chipset coupled with the M8 motion co-processor (same as on the iPhone 6 and 6 Plus). More importantly, you get 2GB of RAM, an 8MP camera and a Touch ID sensor. Something that isn’t mentioned in most specs sheets is that the iPad Mini 4’s display is leagues ahead of the Mini 2 in terms of colour rendition.

iPad Air 2: Jack-of-all-trades
If you’re not interested in using a stylus and don’t want a tiny iPad, the iPad Air 2 is for you. The device features an A8X chip with an M8 co-processor and 2GB of RAM. The A8X chip is the A8, but with a souped-up graphics chip. Coupled with 2GB of RAM, the device is blisteringly fast. Throw in a nice keyboard cover and you won’t even need the iPad Pro. The starting price of Rs 35,500 is also reasonable for a device like this.

9.7-inch iPad Pro: Great speakers, and you can sketch!
Obviously, we haven’t tested the device ourselves, so be warned that whatever we’re talking about is pure conjecture, an educated guess if you will. The 9.7-inch iPad Pro boasts of the same hardware as the larger iPad Pro and since the iPad Pro was fast, we can assume that the smaller one will be faster given that the resolution is lower.

The four speakers have also apparently been carried over from the larger Pro model and one can expect them to be quite loud. The specs include an Apple A9X chip coupled with 2GB of RAM. It has been reported that the 9.7-inch iPad Pro’s A9X is slightly underclocked in comparison to the same on the the 12.9-inch iPad Pro. We would have also preferred having 4GB RAM and can’t understand why Apple is so stingy with RAM. A device that’s specifically designed for multi-tasking could do with all the RAM it can get.

The device is very well endowed in the camera department as well and features a 12MP iSight camera and the ability to record videos in 4K. The display might also be best in class because Apple claims that it uses “true tone” technology to ensure that the white balance is maintained across lighting conditions.

At Rs 49,900 for the base model, the device is expensive. Throw in the Pencil and the Keyboard cover and you can add another Rs 24,000 to that price tag. If you don’t need either accessory, you’re better off taking the iPad Air 2 and saving a pile of money.

12.9-inch iPad Pro: Gorgeous display, great sound, staggering price tag
As the largest iPad yet, the 12.9-inch iPad Pro is strangely compelling to the right person. The display is absolutely stunning and the speakers will put just about every laptop speaker to shame, let alone tablets. Coupled with the Pencil, the iPad Pro may be very attractive to the right person.
If you do intend to type on the device, you need Apple’s Smart Keyboard. Be warned, it’s expensive and not even backlit. The base model is, thankfully, a 32GB model and you get the A9X chip with 4GB of RAM as well.

The 12.9-inch iPad Pro doesn’t really offer much else apart from the form factor. Don’t be fooled into thinking that you can work on the device though, a laptop would serve you far better in most situations. If you can live within its restrictions however, this is the best iPad you can buy.