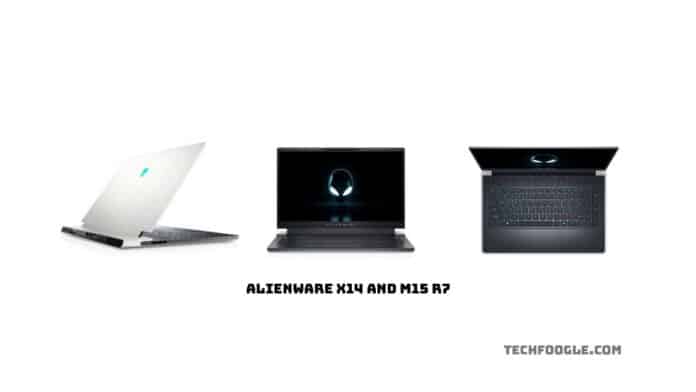 Dell upgraded its Alienware X-series and M-series gaming laptops earlier this year at CES 2022, featuring the newest Intel and Nvidia components. The business has now introduced its thinnest and most portable Alienware X14 notebook to India. In addition, the Alienware M15 R7 has been released in the nation. Check out the information below to learn more about their major specifications, features, pricing, and availability.

The Alienware X14 is the company’s thinnest laptop to date, with a 14.5mm thick chassis. Dell bills it as the thinnest 14-inch gaming laptop that supports Nvidia’s G-Sync and Advanced Optimus technology. Furthermore, owing to its unique patent-pending hinge design, the business has been able to put more components within the small gadget.

Apart from that, the Alienware X14 has Alienware’s unique Cryo-Tech Cooling system, which helps to keep temperatures low during high-performance applications. There’s also an 80Whr battery (the biggest on a 14-inch laptop) that can last over 8 hours on a single charge.

The X14 is also the first laptop from the firm to offer charging through the USB-C connector onboard. The laptop also has Dolby Atmos stereo speakers for an immersive audio experience, RGB-LED lighting in two zones that can be customised, and the Alienware Command Centre for more modifications.

The Alienware M15 R7 was introduced at CES 2022, along with the new Alienware laptops. It has a Dolby Vision-enabled 15-inch display with a refresh rate of either 165Hz or 240Hz and a screen resolution of 2560 x 1440 pixels. Like the X14, it supports Nvidia’s G-Sync and Advanced Optimus technology.

The M15 R7 may be loaded with either AMD Ryzen 6000-series CPUs or Intel’s newest 12th-Gen Core processors. Nvidia’s newest 30-series GPUs, such as the RTX 3070 Ti or RTX 3080 Ti, are used for graphics performance. The M15 R7 also has a MUX switch, which lets you switch between the integrated and discrete GPUs on the fly, just like the current high-end laptops.

In terms of memory, the Alienware M15 R7 features DDR5 RAM clocked at 4,800Mhz and an M.2 SSD socket. It also works with the Cryo-Tech Cooling system, which provides 1.3x airflow and better internal airflow to extend battery life and combat heat concerns. Aside from this, there’s a backlit keyboard with per-key RGB support, Wi-Fi 6E connectivity, and an 86Whr battery that charges with the supplied 240W power adapter.

These Alienware gaming laptops are presently available for purchase in India through Dell’s official webshop, Dell Exclusive Stores, and other large-format retail retailers such as Croma and Reliance Digital. To learn more about these models, visit Dell’s website.