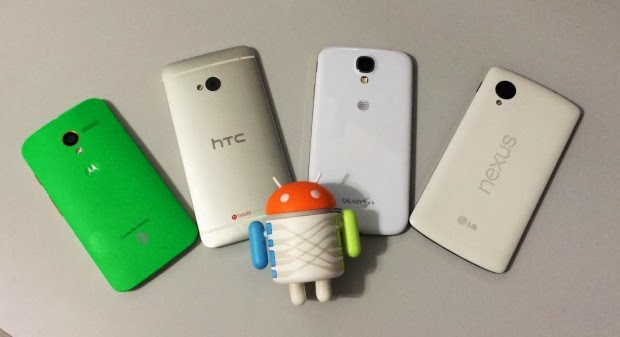 With another year of fascinating mobile devices and technology behind us, it’s officially 2014 and there is plenty of upcoming smartphones and devices to look forward to. From the Samsung Galaxy S5 to Google Glass, and much more.

While we’ve already talked about exciting Android smartphones to expect in 2014, many which will be announced and released before the first half of the year is over, below we want to talk about wants and wishes. With a new era in smartphones and mobile technology officially here, here we’ll go through a few things we wish would happen in 2014 when it comes to Android smartphones.

2013 was a crazy year in technology, especially in the mobile sector, where we saw a few devices push boundaries, offer new never before seen features, and it was the year of quad-core smartphones. The HTC One was wildly popular and the first smartphone with truly great audio and front facing speakers, Samsung released some 5-inch and even a 5.7-inch Galaxy Note 3 covered in fake leather on the back, which actually looked good, and Apple revealed the iPhone 5S complete with a fingerprint sensor on the front.
It was a crazy year, and we’ve only scratched the surface. In 2014 there’s a few things we know we’ll see, as well as some changes that have slowly started to appear, and we hope will finally arrive in 2014. Below is our list of just a couple of smartphone wishes, and we’d love to hear yours as well.

In 2013 battery life was finally one of the things manufacturers — and Google — finally started focusing on. No longer do we have stunning devices that barely last a half a day, and that all started in 2012 with the Motorola DROID RAZR MAXX. Motorola offered one of the biggest battery options in a retail device sold through US carriers, putting a massive 3,300 mAh battery inside its smartphone.
Motorola paved the way, even if others (like HTC) didn’t take notice, and by the end of the year battery life is front and center, and the focus of almost all smartphone manufacturers attention. Google improved Android to be more efficient, the Qualcomm Snapdragon 600 and 800 quad-core chips used less battery than ever before, Samsung’s AMOLED panels became more efficient, and most importantly, we finally started seeing a bigger battery get tossed in devices.

The Samsung Galaxy S4 finally received a large (replaceable) 2,600 mAh battery, and everyone else followed suite. By the end of 2013 we saw batteries over 3,000 mAh in size inside devices from HTC, Samsung, LG, Motorola, Sony and more. And we expect this trend to not only continue, but to be one of the main wars in 2014.
If Motorola can toss a large 3,500 mAh battery in a smartphone for roughly the same price (and thickness) as others, and give us 48 hours of heavy usage, others can do the same. We wish that in 2014 Android smartphones truly start to offer insanely great battery life, and continue to push the boundaries of what we can fit inside our devices. What good is a device with a gazillion features and a huge HD display if the battery doesn’t last very long, and you never enjoy a movie on the go for fear of running out of juice.
Battery life, in my opinion, is the single most important specification on a smartphone, and manufacturers will start to realize that more and more as 2014 progresses.

2014 will be extremely important for Samsung, HTC, and Apple as the smartphone battle is tighter and tougher than ever. One more area everyone will be fighting tooth and nail over, is the title for “best smartphone camera”. Nokia and Windows Phone has the 41 MP Lumia, and while Samsung has some good stuff, cameras will continue to improve.
In 2013 we saw the first smartphone with optical image stabilization, HTC took a different approach with a 4 UltraPixel camera, vs 13 MP options from Samsung, and even Motorola went with a 10 megapixel (ClearPixel) camera in the Moto X and new DROID series. Everyone wants to offer something unique and different, and claim it is the best, and that will usher a much improved camera experience this year.

We’ve heard rumors that Samsung will offer a seriously overhauled and cutting-edge 16 megapixel sensor in the Galaxy S5, and reports have also claimed HTC has some new and exciting camera tech in the work for its smartphones. Either way, expect cameras to improve.
To be honest we know cameras will be better, so we’ll end by saying we wish low-light camera performance improves this year on Android smartphones.

Unlike iOS that’s controlled by Apple, Android smartphones are all over the place. Call it fragmentation or whatever, but it’s also what makes Android great. Each manufacturer has a custom skin offering something unique, carriers like Verizon pre-load apps like NFL Mobile, and everything gets a bit scrambled once Google releases a new version of Android.

Motorola shocked the mobile world by releasing Android 4.4 KitKat to the Moto X two weeks after Google announced it, and in many cases it arrived before the Nexus 4 or Nexus 7 even received the latest software update. This put all other manufacturers on blast.
We hope that move alone makes all manufacturers put a bigger focus and effort on delivering updates in a timely manor. None of this 6 months later stuff. When Google releases Android 4.5 (or 5.0) Licorice we want Samsung, HTC, Motorola, Sony, and even LG (yes, we’re looking at you LG) to deliver updates within 2-3 months. No excuses.

With KitKat Google designed and improved the OS to run on the oldest of devices, ones with low specs. As a result there’s no excuses anymore, and manufacturers need to continue to support its devices, and update them quickly. We see this being the best year for updates to Android, but we’ll have to wait and see.

Something that continues to be a problem for the Android ecosystem is apps, and app updates. Android is now the world’s number one mobile OS with billions of users, yet many developers still release apps first on iOS, sometimes up to 8 months earlier than Android. Gameloft is one of the most popular game developers (I love Asphalt 8) and in 2012 they promised simultaneous app releases, and never delivered. It was better in 2013, but still isn’t quite what we expect.

In 2013 we saw games like Clash Of Clans arrive 9 months after it launched on iOS in December of 2012, Vine by Twitter came to iOS for quite a while before ever hitting the Google Play Store, and even Instagram had millions of users before becoming one of the most downloaded apps in history after launching on Android.
At this point there’s no reason not to develop for Android, as it’s the biggest mobile marketplace in the world, and we hope that there’s no more OS exclusives. Period.

It’s no secret that with iOS and the iPhone there is thousands of accessories, options, cases, bluetooth speakers and more. While Android is clearly harder to build for, considering there’s tons of different phones rather than just a handful, we’re expecting more accessories to be a big part of 2014.
Bluetooth Low Energy (LE) is an extremely important aspect of many accessories such as the Nike FuelBand (which still struggles with Android) and many other things like Google Glass. Allowing an extremely low energy communication between our health and fitness tracking wristbands, Galaxy Gear smartwatches, car stereo and more all with our smartphones.

We’re hoping 2014 is the year Android accessories and wearables truly take off, and have a feeling they will. The Galaxy Gear was only a start, and we’re looking forward to Google Glass, and tons of wearable smart devices throughout 2014.

4G LTE continues to be a huge part of the mobile market, and carriers will continue to fight for our money for years and years. The Nexus 5 works on all 4G LTE networks except Verizon, and in a way does support Verizon, it just won’t work. We are wishing for a truly universal chipset (Qualcomm’s RF360) that will allow one smartphone to work on AT&T, Verizon, T-Mobile, Sprint, and others.
No more carrier exclusives or waiting 2 months after a phone hits AT&T for it also to be released on Verizon. We want smartphones at the same time, and to work across all carriers. It’s coming, you read it here first. And while we’re on the 4G LTE discussion, lets hope AT&T and Verizon continue to improve and expand LTE to be more stable everywhere. It’s grown at an incredible rate, but is starting to get saturated in users, and needs some relief.
As long as Verizon doesn’t start acting like cable companies and charging smartphone users a higher monthly bill for faster 4G LTE (which I can see coming one day) and lower rates for “slower” LTE, I’ll be happy, but I’m afraid that may one day be in our smartphone plans.

In both 2012 and 2013 Google did what no one expected. They released a top-tier smartphone for a price lower than anyone ever expected, all while offering it off contract. The Nexus 4 was nearly the best device around with a 4.7-inch 720p HD display and a quad-core processor all for $299. Offering a flagship device with the latest version of Android for $100 more than most devices that are usually tied to a 2-year contract with a carrier. This will be a thing of the past soon, all thanks to Google.

Read: Nexus 5 Review
With the iPhone, Galaxy S4, and many other devices being over $500 and usually $600 outright, Google released the Nexus 5 for $349. Offering the latest Android 4.4 KitKat, a 5-inch 1080p HD display, the absolute latest and fastest Snapdragon quad-core with 2GB of RAM, an 8 megapixel OIS camera and more all for $349. It’s an amazing deal, and still one of the best devices money can buy, and we expect that to continue in 2014.
That isn’t all either. Motorola, a company now owned by Google, also took a similar approach. The Moto X while originally released for too much is now an affordable device, and the Moto G set a new standard. While the Moto G isn’t a top-tier device you’ll get plenty of bang for your buck.
Motorola’s Moto G offers a 4.5-inch 720p display, quad-core Snapdragon 400, 1GB of RAM, and a 5 megapixel camera for $179. You’ll pay less total than you’d pay for any other phone AND be tied into a 2-year contract. It’s a lucrative offer, but is missing 4G LTE, a 1080p display, and the camera isn’t the best. For $179 though, nothing comes anywhere close, and we hope we see more of this all year long.
Gone are the days of paying outrageous prices and locking ourselves into 2-year contracts. T-Mobile has the UNcarrier plans and no annual contracts, Google’s delivering stellar devices for budget-friendly prices, and technology continues to improve. It will be an exciting year, that’s for sure.

Of course we can also talk about an aluminum Galaxy S5, removable battery and storage options on all devices, flexible displays, front facing true stereo speakers from someone other than HTC, and tons of other things, but we’ll just have to wait and see what everyone has up their sleeves.
We know 2014 will be the year that makes or breaks HTC, Samsung and LG will release curved or truly flexible displays, Android will continue to dominate the mobile market, and possibly even get even deeper integrated into our homes. Smartphones will continue to get bigger and faster, but we’re also wishing they get smaller. We don’t need 6-inches of aluminum and 4G LTE radio bands next to our faces.