Yu Yutopia to launch today in India: Here’s what we know so far 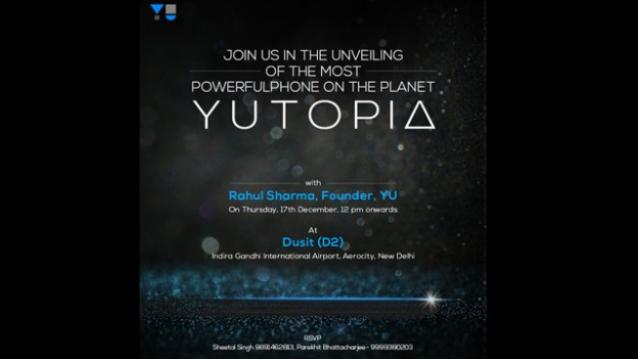 Micromax’s Yu Yutopia, which was originally scheduled to launch on 7 December, will finally launch today at an event held in New Delhi. The company has been running an extensive teaser campaign for the device and in the process, has also taken a dig at companies such as Apple and OnePlus.

The Yu Yutopia is said to pack in high-end specifications and will be toued as the company’s flagship device. Let’s take a look at what we know so far about the upcoming Yu Yutopia.

The launch event will begin today at 12PM and will be streamed on the website as well. If you wish you to live-stream it, you can watch it below.

Back on 6 October, Yu Televentures head Rahul Sharma had sent out a tweet calling Yutopia as ‘the most powerful phone on the planet’. He even took to the forums to build up the hype around the upcoming launch.

Earlier, Yu Televentures had also released teasers saying, “RIP Plastic and Sandstone: True power lies in metal”, a clear dig a t OnePlus’ sandstone cover phones. A teaser from Yu has also shown what clearly looks like a OnePlus 2 handset with the familiar background and a message ‘Never Settle For 1080p’. It looks like the Yu Yutopia will most likely have a Quad HD display as well.