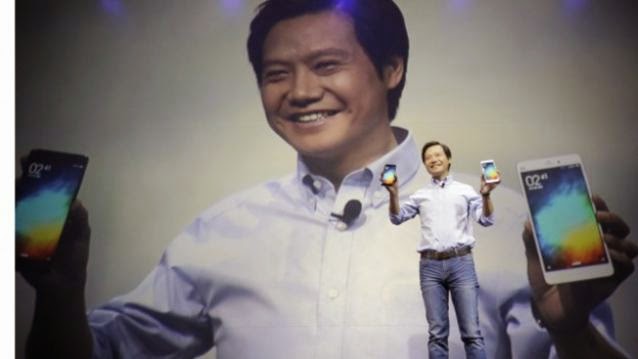 China’s smartphone giant Xiaomi launched its new flagship phones to rival iPhone-6 at virtually half the prices and vowed to expand its India operations, brushing aside the legal challenges it faced over patent issues.

Xiaomi’s founder, CEO Lei Jun formally launched two Mi Note phones which he claimed will challenge iPhone 6 and 6 plus in looks, size and in camera quality.

Though it was a global launch, the company, the world’s third-biggest smartphone maker, has not decided yet when to launch these models in India.

Instead, the Chinese company, which sold a million phones in India last year, will launch its most successful model Mi-4 as it has become highly successful in Chinese and other international market, Hugo Barra, Vice President Xiaomi, said.

He also said the company which currently markets its phones in India through Flipcart e-commerce platform is planning to launch a platform of its own called Mi.com, through which it plans to sell its phones and other products in India in the future.

Wall Street Journal reported that Xiaomi aims to enter Brazil, Russia and other emerging markets in 2015. The company is already in seven markets outside of mainland China.

Brushing aside concerns over legal suit filed by Ericsson in a New Delhi court over patent violations, he said India has become most important market for his firm next to China and would be expanding the footprints in future with more investments.

“We are just getting started in India. We brought so far four different phones. We are going to do lot more and will bring all of our products … like the new box mini, headphones, air purifier and TV. All these products we firmly intend to bring to India,” he said, allaying concerns that being a Chinese company it faced problems in India.

About patents issue, Barra said, “Every company in this industry has to go through the same drill. We like everybody else are going through that,” and added that the Delhi court has allowed his company to sell its devices.

“All our plans for 2015, including bringing more devices to India, setting up exclusive centres, setting up own R&D centre will continue as it is,” he said.

To a question that Xiaomi has least number of patents, Barra said: “It is certainly not about numbers. It is about being strategic and investing in Intellectual property. It is not patents that you have already acquired, it is also current technology which you are developing. We are developing a lot of new technology which we are patenting all around the world,” he said.

This is not a game of one or two years. This is a company that will build into the next few decades,” he said.

About reports that Indian Air Force has asked its personnel not to use Xiaomi phone over concerns relating to data storage issues, he along with Xiaomi India’s head, Manu Jain said Air Force has not taken up the issue with the company directly and has clarified later through media reports that no such orders were issued.

Barra dismissed such reports as some people trying to discredit his firm.Barra also said Xiaomi has not faced any problems in view of India-China sensitivities.

“As far as India-China sensitives I have not seen much,” he said, adding that occasional comments were refuted in the social media by several users of Xiaomi.

He said besides establishing an R & D centre in Bangalore, his company has planned to expand distribution and service centres all around India.

About the potential of Indian market, Jain said according to estimates about 80 million smartphones were sold in India last year, while total number of phone sales were stated to be around 230 to 240 million.

Barra said Xiaomi last year sold 61.1 million devices which was an increase of 18.7 in 2013.
Xiaomi recently completed a successful round of fund-raising from investors that valued Xiaomi at USD 45 billion, making it one of the world’s most valuable technology brands.

@techfoogle
Previous Samsung brings Tizen to India: Does it stand a chance against Google?
Next Motorola to replace defective Nexus 6 devices with undone covers