Xbox Series S Vs Xbox Series X: Difference and Comparison and which should you buy? 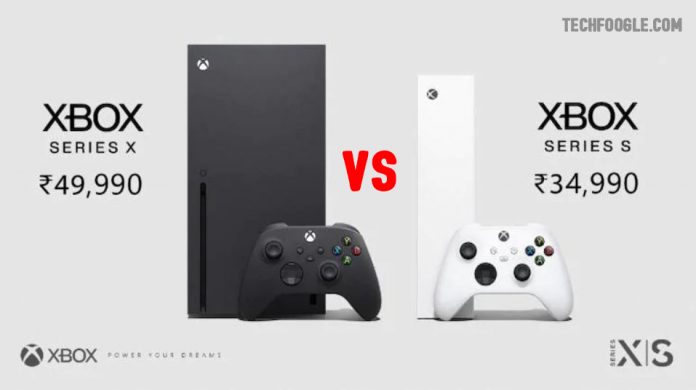 Microsoft recently announced the budget version of its upcoming Xbox console as the Xbox Series S. Both the Xbox Series S and Xbox Series X are launching in India on November 10, although the consoles will be available on pre-order on September 22.

Considering September 22 is less than a few weeks away, we’ve decided to compare both Xbox consoles to understand what you’re getting and what you’re paying for the price difference.

Right off the bat, the Xbox Series S is about three times smaller than the Xbox Series X. The size of the Series S is more in line with the current console generation. Before we dive into the specs, the other physical difference on these consoles, apart from the look, is that the Series S does not have a disk drive, which makes it only a digital console.

Apart from the design and lack of Blu-ray drive, the Xbox Series S has weak across-the-board specs. The most noticeable compromise is in the GPU department, packing low VRAM on the Xbox Series S, a low GPU clock speed, and 4 TFLOPs as opposed to 12 TFLOPs on the Xbox T Series X.

Additionally, the Xbox Series S has very little memory bandwidth, while the storage space is cut in half. And when both upcoming Xbox consoles use the same CPU, the Series S CPU has a slightly lower clock speed. But what does this mean in terms of real-world performance?

What is the difference in specs for Gamers?

While the Xbox Series S will increase the content to 4K, you will not be able to experience ‘true’ 4K gaming on this console. But in our opinion, the resolution is one of the least important factors when gaming. Even at QHD resolution, games still look great on your 4K TV.

Besides, the console will also feature super-fast SSDs when it comes to important gaming features, such as higher frame rates and support for DirectX ray tracing, which will significantly reduce load times. It is worth noting that you can still play 4K media streaming, while the Series S will upscale the games to 4K to fit your TV.

With the Xbox Series S, Microsoft is targeting 1440p gaming at 60fps as standard, which goes up to all 120fps. When you consider that the Xbox One S often struggles to offer 1080p at 30fps, it’s a massive bump in performance. If the Xbox series S can deliver 1440p of gaming consistently at 60fps, it will provide incredible value and is worth considering, especially if you don’t plan on gaming on larger TVs.