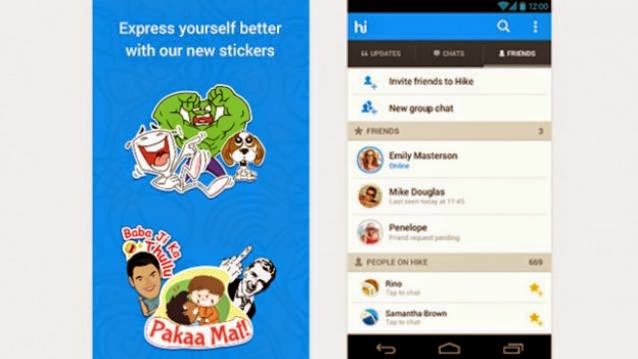 With mobile operators getting wary about messaging apps eating into their voice call earnings, Hike messenger says such services in fact can open a new ‘fat revenue stream’ for the full-fledged telecom firms. Hike is run by Kavin Mittal, son of telecom czar Sunil Mittal, and is a joint venture between Bharti Enterprises and Japan’s Softbank Corp.

Bharti group also runs the country’s top mobile operator Bharti Airtel, which incidentally has been very critical of those offering free voice-over-internet calls and other such services, known in the telecom parlance as ‘Over The Top (OTT)’ players.

“We believe that its not as big a threat as the market is making it out to be,” Hike messenger founder and CEO Kavin Bharti Mittal told PTI in an interview.

“We believe that even if, let’s say voice minutes are cannibalised, if that happens, you are getting people to buy data packs, so you are opening up a brand new very fat revenue stream and to me that’s a win win in long term,” he said.

Hike has announced launch of free voice calling feature on its platform at a time when mobile operators are demanding that OTT players like Hike, WhatsApp, Line, Skype among others should be brought under regulation.

OTT players use VoIP, or Voice over Internet Protocol, to let their users make free calls. Telecom regulator, TRAI has begun a pre-consultation process regarding OTT players and is likely to come out with a draft paper soon.

Bharti Airtel recently proposed to charge extra for voice calls made over the Internet using applications like Skype, Viber and Hike, but it later dropped the plans following an outcry on social media.

Kavin said that globally also, where there are 4G networks and high-end 3G networks, people are still buying voice minutes.

“Talks of cannibalisation happened during messaging too and look where it has come, its not really has a big impact, so we believe that same thing will happen for voice,” he added.

“We believe that for services like Hike and YouTube and so forth, people actually buy data plans. If we did not exist, people would not buy data. So, on one hand we are driving a new source of revenue for telcos,” he said.

The data growth for telecom operators is close to 100 per cent a year and now it contributes to double digit percentage in topline revenues. Kavin said with the launch of voice calls on Hike, in the first 12 hours, over half a million calls were being made.

The company has optimised the technology for Hike and people can make 4-5 minutes of calling per MB on 2G.

The introduction of voice calls has come within a month of Hike making it’s first acquisition – a free calling app Zip Phone.

The free voice calling feature has been launched in beta on Android, which contributes to over 90 per cent of its user base whereas the iOS and Windows versions are slated to release by the end of this quarter.

The Hike founder said, “Our target is to become the company with 100 million users by early to mid next year, we believe voice calling as a feature will help us get that milestone faster.”
Launched in December 2012, hike has over 35 million users and has raised USD 86 million from Tiger Global and BSB till date.

Competing with global players like WhatsApp, Line and Viber, Hike has a fairly young user base with over 90 per cent of them under the age of 25, and in India.