Samsung Galaxy Note 4 first impressions: The S-Pen is the key highlight of this smartphone 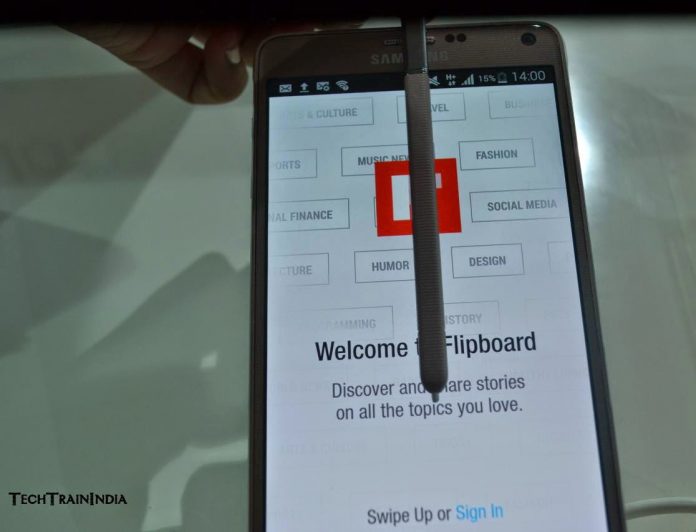 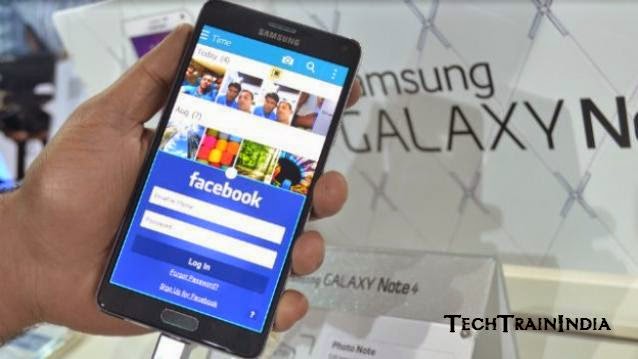 Samsung Galaxy Note 4 is out in India and the MRP is a whopping Rs 61,500, although the market operating price will be slightly lower at Rs 58,300. Samsung’s Note 4 will be available in India on October 17th, the same day as rival Apple’s iPhone 6 and iPhone 6 Plus get launched. The company also introduced its Gear S smartwatch in India for Rs 28,900 along with Gear Circle bluetooth headphones which start at Rs 8,500.

As far as pricing goes, Galaxy Note 4 is in the premium category range. During the launch event, we managed to spend some time with the Samsung Galaxy Note 4 and here’s our first impression of the device. 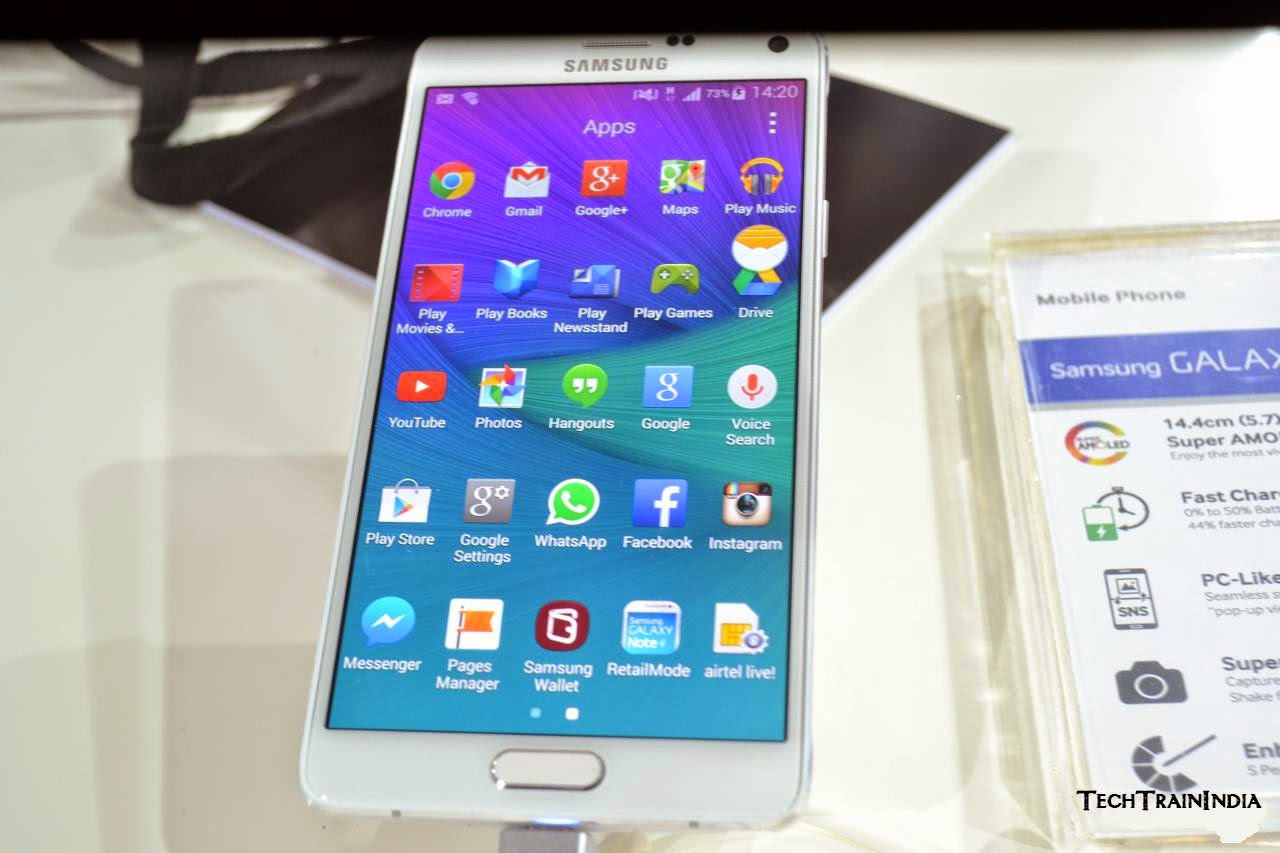 Design, Screen: As far as design goes, Samsung Galaxy Note 4 hasn’t changed much from the Note 3. Yes, the screen is still 5.7-inches and while the device doesn’t feel too bulky, it is slightly heavier than the Note 3. The Note 3 was 168 g while the Note 4 is 176 g. The thickness is the same at 8.5mm.

Like the Note 3, the Note 4 has the faux leather back, except that there is none of that ugly fake stitching in the sides that we saw on the earlier device. It actually doesn’t look or feel that tacky, but then when you’re buying a phone for Rs 58,000, the least you expect is a full-metal body.

What really works in this phablet’s favour is the screen resolution which is a Quad HD Super AMOLED display (2560 x1440 pixels resolution) with a pixel density of 515 pixels per inch. It’s truly one of the most stunning screens you can get on the market and given that it’s 5.7-inches, watching videos on this should be quite a treat. 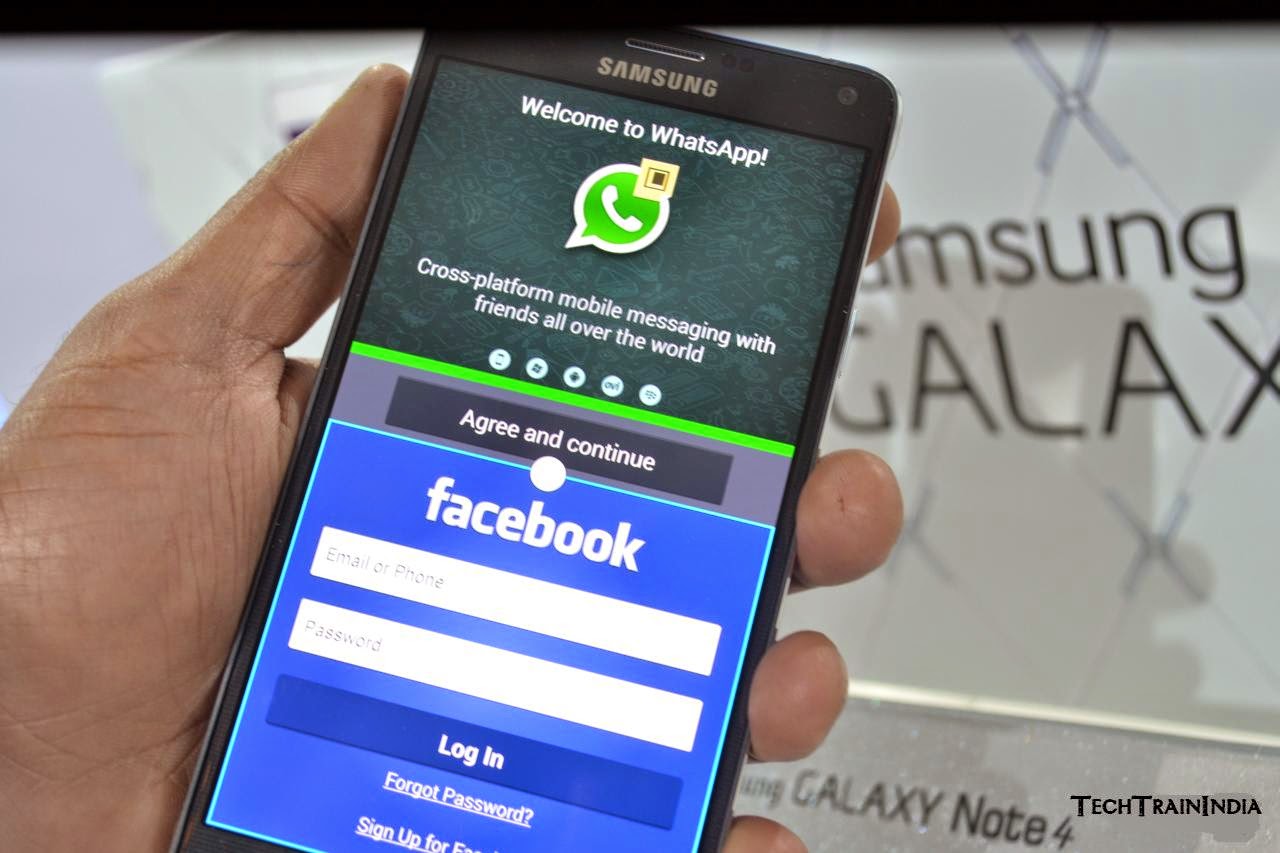 The Galaxy Note 4 continues with the Multi-task Windows option that we’ve come to expect in the Galaxy series.

Processor, Specs, Connectivity Samsung has gone with the 2.7 GHz quad-core processor sporting Snapdragon 805 SoC in India and has ditched the octa-core housing Exynos SoC. The RAM on this smartphone is 3GB, with 32 GB internal storage space, and extendable support up to 128GB. In terms of space, the Note 4 might just prove to be a better deal than the iPhone 6 Plus, since there is no 32 GB version of the iPhone this time and of course Apple doesn’t support microSD.

Since Samsung has introduced the Snapdragon version in India, a lot of people might just be happy with this. Where LTE support is concerned, it supports LTE Cat 6, but given that this is yet to launch in India, 4G on the Note 4 won’t be possible. So if you are not in a circle where 4G is an option, and you have the budget to afford it, the Note 4 will be a disappointment.

Other connectivity options on the list are NFC, Bluetooth 4.0, and of course WiFi 802.11 a/b/g/n/ac (2X2 MIMO which ensures better download and upload speeds) 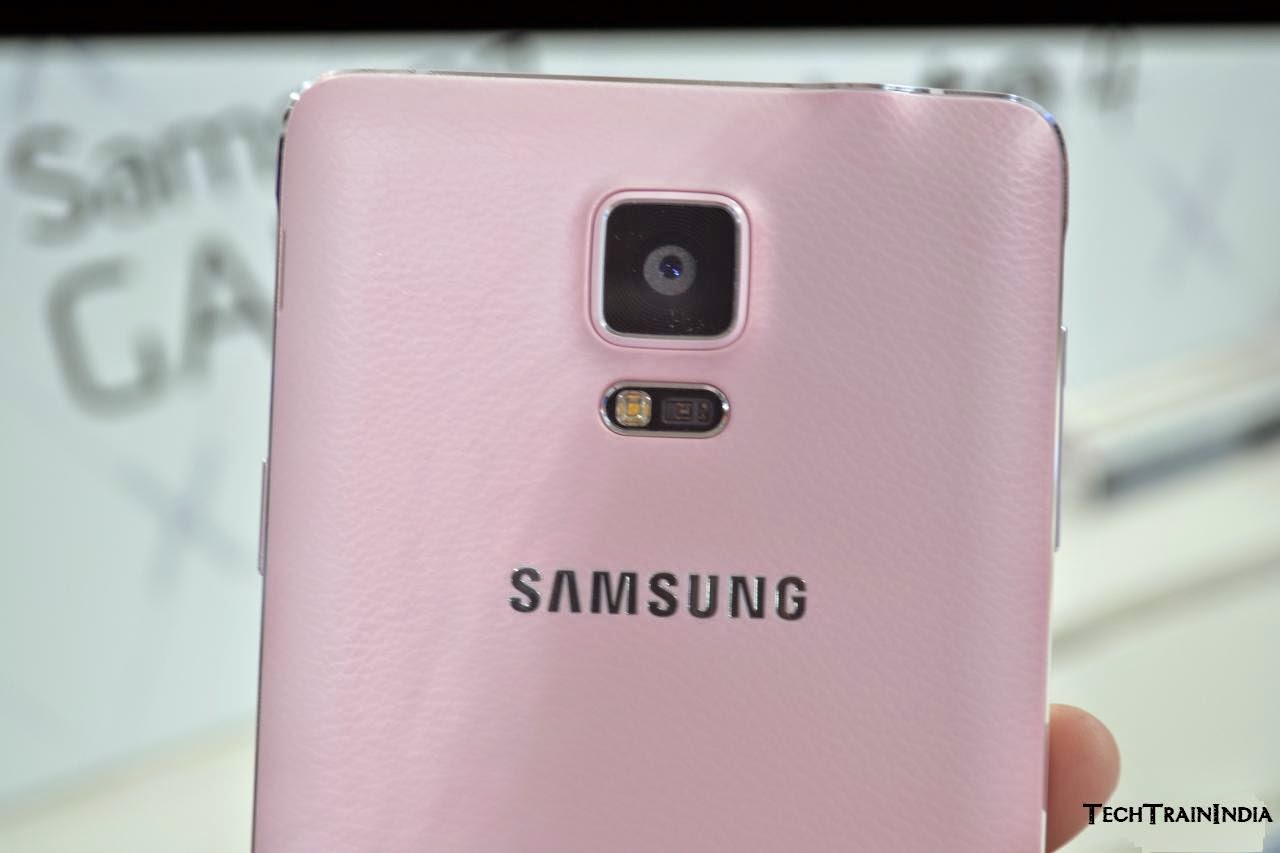 Camera: The Note 4 has a 16 megapixel back camera with Optical image stabilisation and of course lots of other modes like any premium Samsung Galaxy device. From burst mode to rear camera selfie to panorama to selective focus, users who love to take pictures have a lot of options as well.

The front camera is a 3.1 megapixel one and has a wide-angle selfie mode, where you can take selfies with a much larger group, without forcing everyone to squish each other. It’s an interesting concept and we’ll have to spend a lot more time to see how useful this really see. 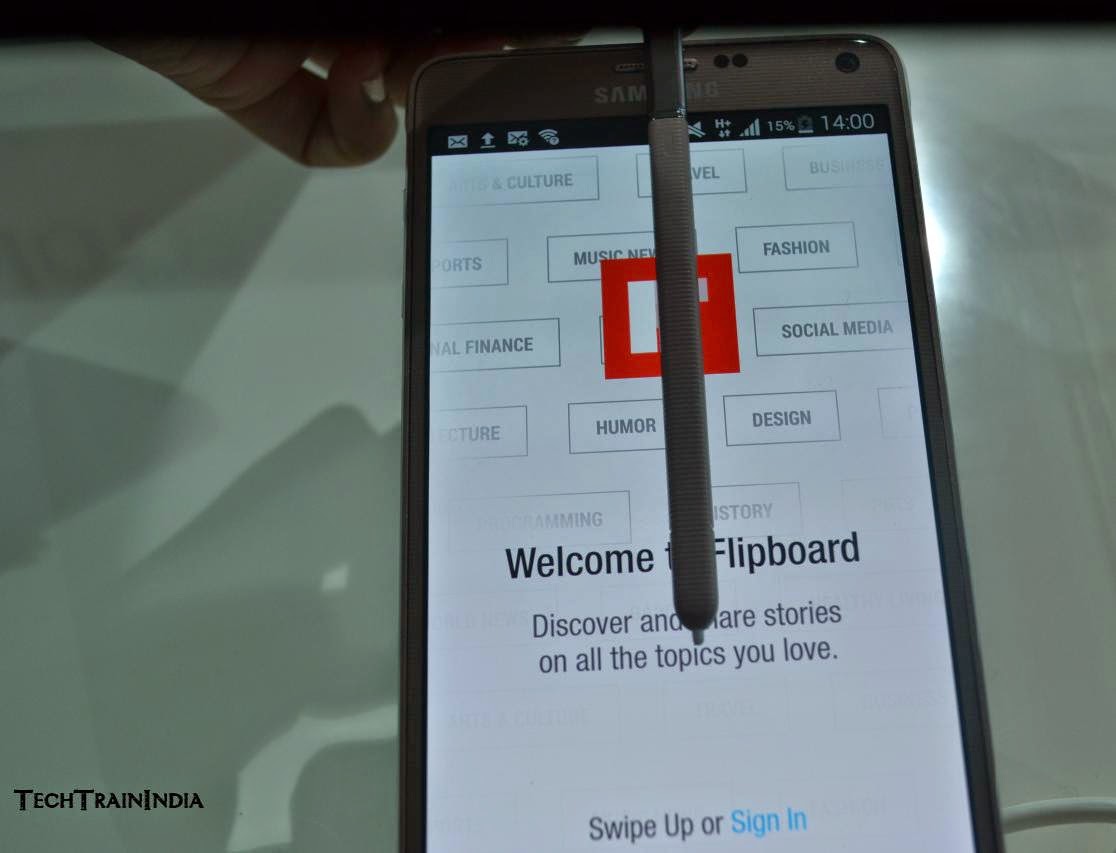 Samsung Galaxy Note 4 comes with an improved version of the S-Pen featuring air command, smart select and share, photo note and so on

S-Pen, Multi-Window: With the Note series, this is pretty much what forms a major part of the device. For starters, Samsung has improved the S-Pen in the Galaxy Note 4 and you just have to hover the S-Pen over the screen, then press the side button on the pen to wait for the Air-Command palette to open.

We spent a considerable amount of time trying out the S-Pen command. It was a little tricky to get the Air Command to show almost instantly.  But once it opened, we found that selecting and copying chunk of text was quite easy. You can then forward that as a message or save as a Note or even share via a variety of options that Samsung allows. The Photo Note feature allows you to take a picture of a whiteboard with text on it, then edit them out as a note via the S-Pen.

The S-Pen works almost like a mouse on your smartphone and if you’re doing a lot of typing, cutting, copying, this is definitely an asset.

Like we said, getting the Air Command to show in one go was difficult at times and using the S-Pen with its plethora of features will take some learning curve for new users.

Multi-Windows is of course another feature that we’ve come to associate with the Samsung Note series. In the Note 4, users can run two apps on the same screen simultaneously, then say cut a picture from another app and forward it on the other app. Again it’s a gimmicky feature that you might not end up using all the time but handy nonetheless. 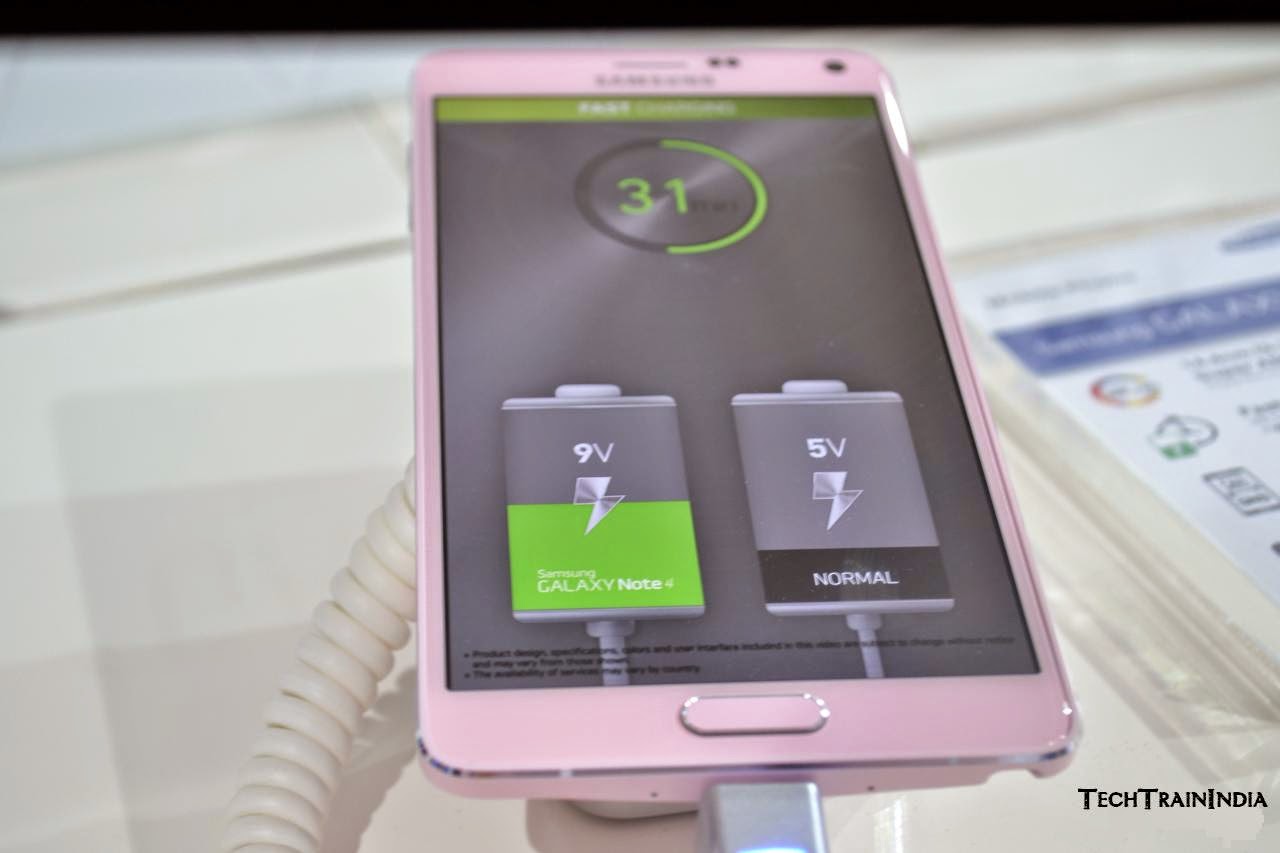 Battery The Galaxy Note 4 has a 3220mAh battery and Samsung is promising what it calls Fast Charging on this phone. The phone will go from zero to 50 per cent in around 30 minutes, which sounds great on paper. Of course, we can only talk about this more, once we’ve spent some time with the smartphone.

In conclusion: There’s no doubt that this is a premium device, especially for those who do a lot of presentations, documents, editing on their smartphones and the S-Pen is a big plus point there.

But the plus points take a huge hit, when you look at the price: Rs 58,300. The price is definitely far too high when you think that the Samsung Galaxy Note 3 had launched for Rs 50,000, and essentially the only improvements we’re seeing are: the improved S-Pen and the fact that India got the Snapdragon 805 variant of the Note 4.