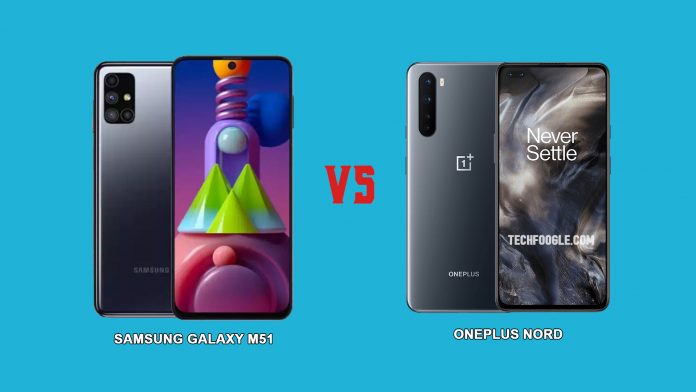 Galaxy M51 vs OnePlus Nord – Both are smartphones of a segment. The Galaxy M51 has a 7,000mAh battery and an under-display fingerprint scanner in the Nord.

This smartphone can give a tough competition to OnePlus Nord in India.

Since Galaxy M51 is a battery centric phone, due to this, if you want more backup, then at first glance it looks more backup than OnePlus Nord.

The Galaxy M51 has a 7,000mAh battery, while the OnePlus Nord has a 4,115mAh battery. However, with Nord, you have support for faster charging compared to M51.

With the Galaxy M51, you also get the support of reverse charging. UST Type C to USB Type C cable is also provided with which you can charge other smartphones.

The Galaxy M51 has a 6.7-inch Super AMOLED Plus Infinity O display. It is full HD Plus and has a Panchhole selfie camera. Here is the protection of Gorilla Glass 3 which is a bit disappointing. This version was launched in 2013.

OnePlus Nord has a 6.44-inch Fluid AMOLED display. With this, you also get a 90Hz refresh rate and it is Full HD Plus. Here is the protection of Gorilla Glass 5.

OnePlus Nord also has four rear cameras. The primary camera is 48 megapixels which use the Sony IMX586 sensor. The second camera is an 8-megapixel ultra-wide lens. There are a 2-megapixel depth-sensing camera and a 5-megapixel macro lens. Two selfie cameras have been given on this phone.

The Galaxy M51 has Android 10 based One UI Core 2.1 OS. There are many pre-loaded apps in it. There are apps like Amazon, Dailyhunt, Snapchat, Prime Video, and Netflix.

OnePlus Nord has Android 10 based Oxygen OS 10.5. Bloatware is minimal in this and it gives a clean experience.

Comparing the specifications and features, these two smartphones can give tough competition to each other in this price segment. However, if the battery is your biggest concern, then obviously the M51 can be a profitable deal for you.