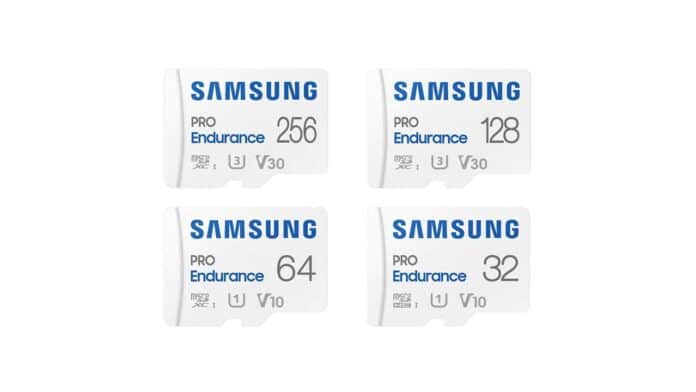 Samsung Pro Endurance Memory Cards can store data indefinitely for up to 16 years.

Samsung recently announced its new Pro Endurance MicroSD card for CCTV cameras, body cameras, doorbell cameras, dashboard cameras, and other devices, in addition to revealing the next-generation UFS 4.0 technology. Samsung’s new Pro Endurance memory cards have capacities of up to 256GB and may be used for up to 16 years of continuous recording time. So, let’s get into the specifics right now.

According to a press release from Samsung, the new Pro Durability memory card offers “increased endurance and exceptional performance for seamless and dependable continuous capture and playback.” It comes in four different storage capacities, ranging from 32GB to 256GB.

To begin, the maximum capacity Pro Endurance memory card can record up to 16 years (approximately 140, 160 hours) of high-resolution film and lasts as long as 33 speed-focused memory cards, owing to the usage of the company’s enterprise-grade NAND flash memory technology. It can also give read rates of up to 100Mbps and write speeds of up to 40Mbps, and it supports Full HD and 4K quality playback.

The new Pro Endurance memory card has also been developed to withstand hard weather conditions, which is significant because body cameras, CCTV cameras, and other surveillance cameras are frequently exposed to harsh environments.

To make the memory card more durable, the business has added “enhanced six-proof durability.” Magnets, water, X-rays, and high temperatures are all protected against using this device. The Pro Endurance cards are also water-resistant and wear-resistant, with a 5-year warranty.

Another significant feature of the new Pro Endurance memory card is that it has been built to withstand adverse weather conditions, which are frequently encountered by body cameras, CCTV cameras, and other surveillance cameras.

To make the memory card more durable, the company has incorporated its “enhanced six-proof durability.” It has a magnet, water, X-ray, and severe temperature protection. The Pro Endurance cards are also Drop Proof and wear-proof, and they come with a guarantee of up to 5 years.

The new Samsung Pro Endurance memory card costs $10.99 (about Rs 830) for the base 32GB model and $54.99 (approximately Rs 4,180) for the biggest storage option. The prices for each of the storage options are listed below.