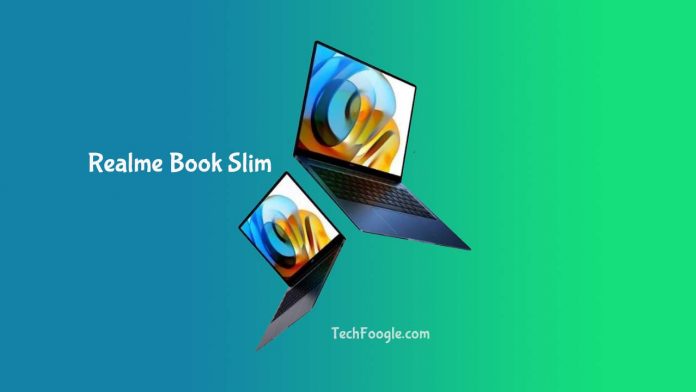 Realme Book Slim Price in India: Realme, a Chinese smartphone manufacturer, has entered the laptop market today, putting an end to the speculation. The much-anticipated Realme Book Slim has been revealed, including a sleek design, 3:2 2K display, 11th-Gen Intel Core CPUs, and more. As a result, the company promises a strong performance in a compact design.

Real Blue and Real Grey will be the two colour options for this laptop. It will be available only on Flipkart, Realme’s website and offline retail outlets starting on August 30th.

Specifications for the Realme Book Slim

To begin with, the Realme Book Slim has an aluminum alloy unibody with a gleaming Realme logo on the A-panel. The laptop measures 15.5mm thick (tapers to 14.9mm at the front) and weighs 1.38kg, which puts it in the same class as Apple’s MacBook Pro.

The 14-inch 2K IPS display on the Realme Book Slim has a 3:2 aspect ratio, 2160 x 1440-pixel resolution, and up to 400 nits of peak brightness. The display screen on this device has a 100% sRGB color gamut, Gorilla Glass protection, and an Oleophobic coating. Furthermore, the bezels are small, and the display has a screen-to-body ratio of 90 percent.

The Realme Book Slim is equipped with an 11th-generation Intel Core i5-1135G7 CPU. It comes with Intel’s integrated Iris Xe graphics, which the firm claims can comfortably handle popular esports titles like DOTA 2 and League of Legends. There’s also 8GB of RAM and up to 512GB of SSD storage available.

The laptop comes pre-installed with Windows 10, with a free Windows 11 update planned for later this year. A built-in HD camera, a backlit keyboard with 1.3mm key travel, a big trackpad, and a fingerprint sensor baked into the power button are all included in the Realme Book Slim. Dual stereo speakers with Harman and DTS compatibility, as well as dual-mic noise suppression are included.

Furthermore, the Realme Book Slim has a PC Connect companion software that allows you to connect your Realme phone to your Windows PC in a smooth manner. You can simply drag and drop files between devices, sync your clipboard history, and mirror your phone’s screen with this feature. It’s the one feature that Android users will like, and it’s available on laptops from various phone manufacturers such as Xiaomi, Huawei, and others.

In terms of battery life and charging, the Realme Book has a 54Wh battery pack. In the box, the firm included a 65W USB-C fast charger that can charge the battery to 50% capacity in around 30 minutes. The company’s patented 30W Dart Charge technology is also compatible with the 65W laptop charger. That means you may use this charger to charge all of your Realme phones.

Furthermore, there are several ports and communication possibilities aboard. The laptop has two USB-C ports (one of which supports USB-PD and Thunderbolt 4), as well as one USB-A 3.1 Gen1 connector and a 3.5mm headphone jack. Wi-Fi 6, Bluetooth 5, and other features are also supported by the Realme Book Slim.

In the mid-range laptop category, the Realme Book Slim will compete with other 11th-Gen Intel laptops such as the Acer Swift 3 and the forthcoming Mi Notebook. So, it’ll be fascinating to watch who wins in this pricing bracket in India.