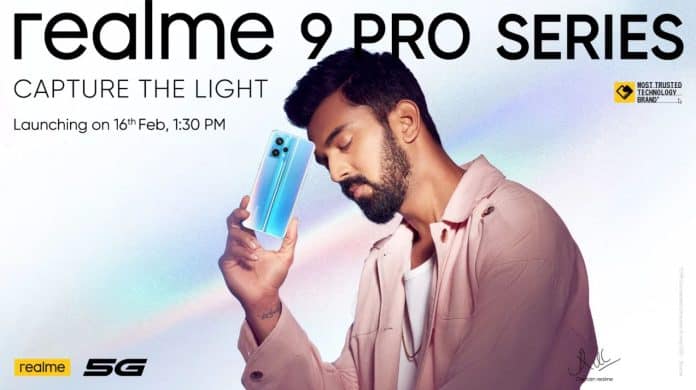 After a few teases, Realme has confirmed the Realme 9 Pro series’ debut date in India. The Realme 9 Pro and 9 Pro+ will be available in India on February 16, and the firm has begun mailing out media invites.

The Realme 9 Pro series will be launching in India on February 16 at 1:30 p.m. via an online event. The phones will be released with the Realme 9i, which was recently unveiled in India, and will serve as the successors to the Realme 8 range.

While the company does not release complete facts, we do have some information. The Realme 9 Pro phones will have a Light Shift design, similar to the Vivo V23 Pro, which will include a colour-changing effect. Under different lighting circumstances, the phones will transform from blue to red, giving them a dual-colour effect that sounds cool! This, however, will only be available in the Sunrise Blue hue, and the other alternatives will be unavailable.

The Light Shift Design of the #realme9ProSeries is inspired by the transition of the sky from dusk to dawn. A seamless shift from blue to red!
Drop a💙in the replies if you love it!#CaptureTheLight pic.twitter.com/XnBsgfMbmi

Aside from that, we already know how the phones will appear. The Realme 9 Pro will have a rectangular-shaped back camera hump with two large and one tiny camera housing. A punch-hole camera cutout may also be seen in the front left corner.

Realme also stated that the 9 Pro+ will include a heart rate sensor that can be accessed by fingerprint scanning, implying the presence of an in-display fingerprint reader. We’re not sure if the Realme 9 Pro will offer the same feature.

The Realme 9 Pro series is also likely to emphasise cameras, with up to a 50MP primary camera with a Sony IMX766 sensor, OIS+EIS, AI Noise Reduction 3.0, Street Photography 2.0, and other cameras capabilities. The MediaTek Dimensity 920 SoC is confirmed for the 9 Pro+, while the Snapdragon 695 chipset is rumoured for the 9 Pro.

Both phones will support 5G, have high-refresh-rate screens, and are expected to be inexpensive. We’ll have to wait until the February 16 launch event for further information on the new Realme 9 Pro series. As a result, stay tuned to learn everything there is to know about them.