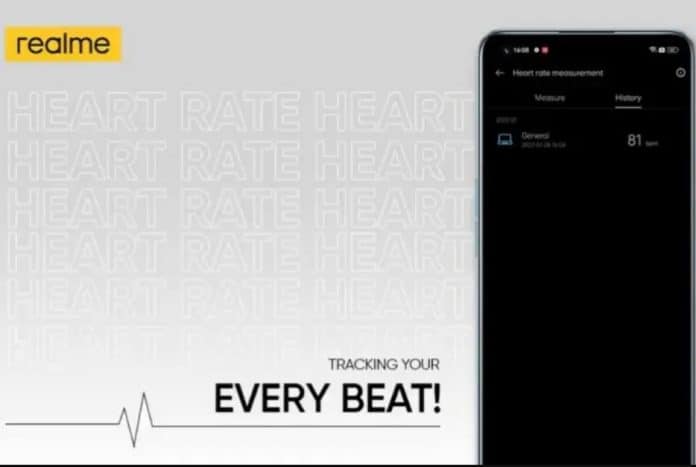 Madhav Sheth confirms that the Realme 9 Pro+ would have a heart rate sensor.

The Realme 9 Pro+ will have a heart rate sensor

Realme CEO Madhav Sheth announced on Twitter that the Realme 9 Pro+ would have a heart rate sensor, allowing users to monitor their heart rate at any time. If you’re wondering how this would work, all you have to do is register your fingerprint on the in-display fingerprint scanner (and an in-display fingerprint scanner has now been verified!) Stay motionless while it’s being recorded, and it’ll be finished. You will also be able to keep track of all previously recorded metrics.

Keep a track of your health and be aware of it throughout the day.
Our upcoming #realme9Pro+ will feature a heart rate sensor. pic.twitter.com/K0vUoDaGl5

However, Realme is not the first brand to include a heart rate sensor in a smartphone. Samsung originally launched this functionality with the Galaxy S5 in 2014, and the most recent device to do so is the Lava Pulse feature phone, which was released in 2020. Furthermore, you can easily measure the same on a Xiaomi phone. Nonetheless, it looks to be an appealing feature, and it will be fascinating to see how effectively and correctly the sensor functions.

Aside from that, Realme has stated that the 9 Pro series would be camera-centric, with a possible emphasis on low-light shooting. The phones are also expected to have a fashionable and lightweight design, however, specifics are not yet available. More information on this is expected to be released by the corporation very shortly.

Meanwhile, there are a few rumours to consider. Both the Realme 9 Pro and 9 Pro+ are expected to include a 90Hz or 120Hz AMOLED display, as well as compatibility for up to 65W fast charging and Android 12 out of the box. The 9 Pro might have 64MP triple rear cameras and be powered by a Snapdragon 695 processor, while the 9 Pro+ could have 50MP cameras and be powered by a MediaTek Dimensity 920 processor.

Both phones are likely to compete with Xiaomi’s Redmi Note 11T, the forthcoming Note 11S, and the Note 11 in the budget market, similar to their predecessors. The Realme 9 Pro is estimated to cost Rs 16,999, while the Pro+ variant might cost Rs 20,999. They’ll be joining the Realme 9i, which was just released in India.

Because no information about the Realme 9 Pro series’ availability has been released, it’s advisable to wait and we’ll keep you updated.