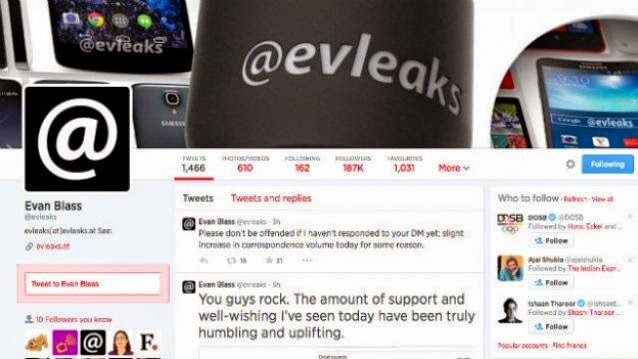 All good things must come to an end. Thank you for an amazing two years. [RETIREMENT]
— Evan Blass (@evleaks) August 3, 2014

Blass’s leaks centred around smartphones from Samsung to Motorola to Microsoft to HTC and have been seen as pretty accurate by everyone. Blass had revealed his real identity last year.  In an interview to The Next Web, Blass said that the decision had come down to money.

He told the website, “These matters are always somewhat complicated, but like many things, it mostly comes down to money. Trying to monetize a stream of Twitter leaks is not easy. First I tried monthly sponsorships. Then weekly. Then single sponsored tweets. I took donations — felt like online panhandling.”

He added that, “Most of my tech-savvy-heavy audience seem to be pretty heavy ad-block users.”

Sadly Blass was also diagnosed with multiple sclerosis and he does need the finances. Evan Blass, worked with the popular technology blog Engadget from 2005 to 2008 and later he was Managing Editor at Pocketnow.com.

Blass said that his favourite leak was the HTC M8 Prime. As far as proudest moment, Blass said that “it’s probably being named one of Wired’s 101 Signals last year — a list of ‘the best reporters, writers, and thinkers on the Internet.”