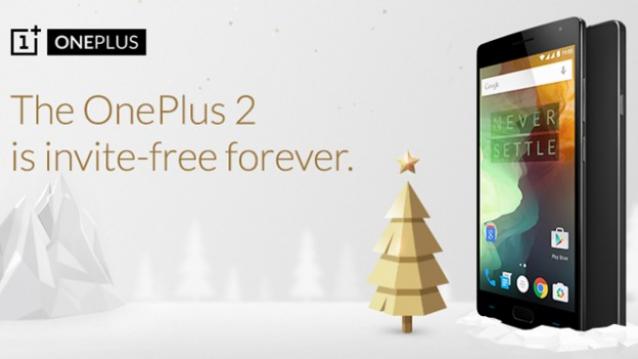 On December 17, OnePlus will be celebrating its second anniversary. On this occasion, the company has announced that you will not need an invitation to buy the OnePlus 2 starting December 5 and also, the OnePlus X will be available invite-free from December 5 to 7. During this period, OnePlus will also offer consumers 1 percent to 90 percent discounts on various accessories.

According to the OnePlus blog, the company stated, “Speaking of cheer, we’re ringing in the holiday spirit by making it much simpler to give the gift of OnePlus this year. Starting at midnight on December 5, not only will the OnePlus 2 will be invite-free forever … we’re also making the OnePlus X invite-free all day December 5-7.”

In addition, the company is offering the OnePlus 2 StyleSwap covers at 50 percent off while select OnePlus One accessories at 90 percent discount. All other accessories at 10 percent off as well a limited number of first orders will receive an exclusive Never Settle mousepad as a special holiday gift.

With the OnePlus 2, the company has built a device that competes with the likes of the Google Nexus 6P and others. In fact, the superior specs sheet at a comparatively lower price gives it an edge over other flagships.

On the camera front, it comes with a 13-megapixel snapper. It also gets a new camera and a new solution that allows you to take 50MP photos and there’s also the slow motion mode. It comes powered by Snapdragon 810 coupled with 4GB of RAM and houses a 3,300mAh battery. You can read our full review of the OnePlus 2.

On the other hand, the OnePlus X is the first ‘Make in India’ device for which local production will start in Hyderabad. In terms of specifications, the device will sport a 5-inch AMOLED display offering a resolution of 1080 x 1920 pixels. It will be powered by Qualcomm’s quad-core Snapdragon 801 processor clocked at 2.3 GHz. The OnePlux will have 3 GB RAM. It will include an internal storage of 16GB, and can be further expanded up to 128GB via a microSD card.

The device sports a 13MP rear camera along with a 8MP front facing camera. The autofocus allows you to capture your subject in 0.2 seconds. The dual SIM smartphone is fuelled by a 2525mAh battery. The OnePlus X will run Oxygen OS based on Android 5.1.1 Lollipop.