Now a bracelet that projects your smartphone display onto your skin 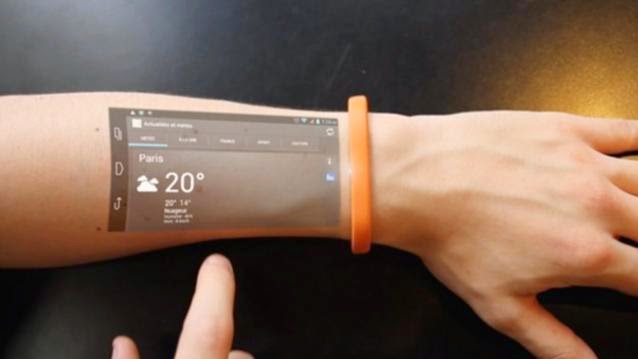 A tiny new wristband can project a tablet interface onto your arm, effectively turning it into a smartphone every time you twist your wrist.

The Cicret Bracelet, designed over the course of 6 months, comprises a pico projector and a row of eight proximity sensors that point towards
the user’s forearm. It operates as a standalone device and, when activated with a twist of the wrist, projects an Android interface onto the user’s arm.

The proximity sensors detect where the user’s finger or fingers are and allow them to interact with the interface as they would any other Android device, ‘Gizmag’ reported.


The device will allow users to send and receive emails, browse the web and play games. It will also be possible for users to pair it with an existing smartphone, answer incoming phone calls and activate the speakerphone functionality on their smartphone.

The Cicret Bracelet features an accelerometer and a vibration module, along with an LED for notifications. Connectivity is provided by way of WiFi, Bluetooth and a Micro USB port. It is expected to be made available in 16 GB and 32 GB models.

The device could cost up to USD 400 and reach the mass market within a year and a half.