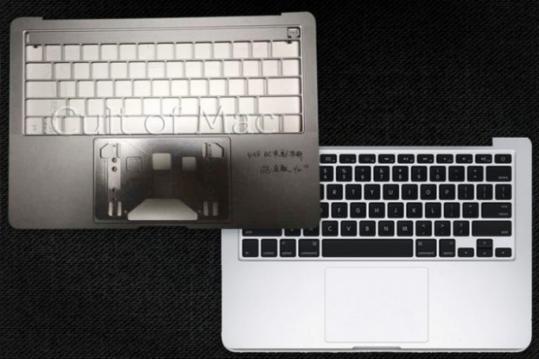 A close look at the casing above shows a missing Function keys row at the top, which is being speculated to be taken care of by the new OLED touchbar. According to Cult of Mac, the touchpad seems to have a lip that slips into a smaller hole on the left side of the cutout to keep it in place, whereas the hole on the right hand side has three pins which likely connect the touchpad to the logic board underneath.

It is being speculated that the OLED touchpad can be used for multiple functions, apart from just showing the Function keys. It could be used to display notifications, replace OS X’s dock entirely or even add custom shortcut keys. The possibilities can be endless.

There’s another photo which also shows four USB Type-C ports (two on either side) and a headphone jack on the right hand side.

Recently, popular Apple-centric blog 9to5Mac in conjunction with their sources and Ming-Chi Kuo, a reliable Apple analyst at KGI Securities, had reported that Apple was working on overhauling the MacBook Pro.

Apple’s WWDC conference will be held on 13 June and we may just get to see the redesigned 2016 MacBook Pro then. But according to Ming-Chi Kuo’s report, the MacBook Pro may not launch until later this year.