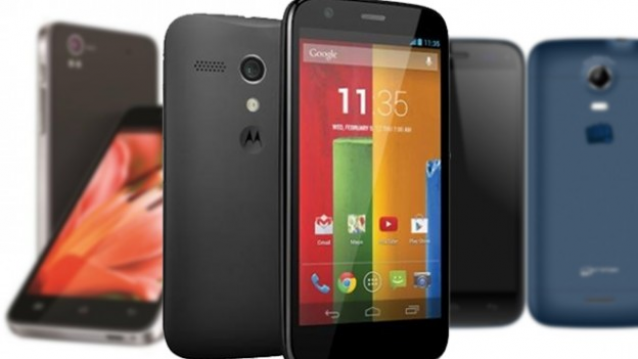 The Moto G takes on the competition

After a long wait the Moto G finally comes to India and the price is spot on to take on the competition of Indian-branded low-cost phones. With a starting price of Rs 12,499, the Moto G has got the right start, but we suspect the 16GB model priced at Rs 13,999 will sell a lot more. At that price range, the Moto G will take on Lava Iris Pro 30 and the Micromax Canvas Turbo Mini. With a price tag of Rs 15,999, Lava has stepped into the most competitive price bracket in the Indian mobile space. While Micromax has toned down its popular Canvas Turbo and added an attractive price tag of Rs 14,490 to take on the Moto G. Let’s take a quick look at the specs to know how the new Moto fares against its competitors, at least on paper.

Motorola Moto G
The Moto G has received rave reviews for its build, performance and price, and is the latest budget smartphone to hit the Indian market. It currently runs on Android 4.3 Jelly Bean, and Motorola has already started rolling out 4.4 KitKat update for the device. Just like the Iris Pro, the Moto G shuns the path of the phablet and sports a rather diminutive 4.5-inch TFT LCD panel with 720p resolution. It is powered by a quad-core Snapdragon 400 CPU and an Adreno 305 CPU, which should be enough for most things Android. However, its biggest trade-off appears to be the 5MP camera. The connectivity options won’t disappoint and include Wi-Fi, GPS, GLONASS and Bluetooth. The younger sibling of the Moto X offers 8GB and 16GB onboard memory without microSD card support. Motorola packs in additional 50GB of free storage in Google Drive for two years. Its 2,070 mAh battery promises 24 hours of mixed usage.

Lava Iris Pro 30
The Lava Iris Pro 30 is easily the most premium-feeling Android phone from the manufacturer and it wowed us in the brief time it spent in our labs. As you can see in our review of the phone, the combination of a bright 4.7-inch HD display. To ward off attention from its 720p display, Lava has added in some improvements such an OGS technology and Content Adaptive Backlight Control (CABC) along with Gorilla Glass protection. Built of magnesium, the device is light at 114 grams and mere 7.5mm thick. On the camera front, we are a little disappointed with the 8MP BSI rear snapper. There were small niggles in performance, but the Iris Pro can certainly hold its own against the competition from the likes of Micromax and Xolo.  The company claims that the 2000 mAh pack along with CABC should be capable of delivering longer usage times. Like most smartphone manufacturers these days, Lava has added a few seemingly fancy but largely useless features like flip to mute, lift to answer a call, voice and face unlocking and more.

Micromax Canvas Turbo Mini
The Turbo mini is clearly a stripped down version of the popular Canvas Turbo. Sporting a smaller 4.7-inch display with lower 720p resolution, its pixel density limits to 312 ppi, similar to the Iris Pro 30. The similarities don’t end here; the Turbo mini supports 4GB onboard storage, microSD card slot up to 32GB, 8MP rear snapper and most of the connectivity options. It is slightly lighter than the Iris Pro 30 at 111 grams, but slightly thicker at 7.9 grams. There’s a better-sounding 5MP front camera. The mini is powered by a quad-core MediaTek MT6582 processor that clock at 1.3GHz, coupled with 1GB of RAM. All of this is fuelled by an 1800 mAh battery that promises to deliver up to 6.5 hours of talk time, but sounds slightly small to us. However, we can confirm this only when we’ve tested the device in our loop test. 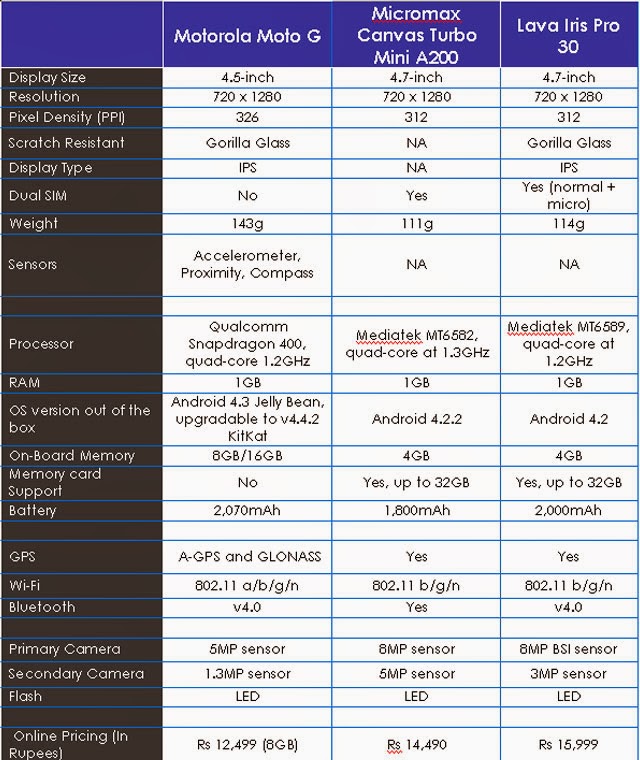 Bottom line
Lava has built an extremely sleek and lightweight device that looks and feels way above its price segment. However, the Moto G is priced brilliantly and could steal any advantage Lava may have had by bringing the phone out earlier. The real loser here could be the Canvas Turbo, which has no standout features that can be called upon in this fight. In terms of processing power, Moto G takes extra points for the more power-efficient Snapdragon 400 SoC and the Adreno GPU. This isn’t to say that the Mediatek chipsets used in the other two are pushovers.

One can also expect the Moto G to get Android 4.4 KitKat in the near future, but no such update promises have been made for the Iris Pro 30 or the Turbo mini. Both Motorola and Lava seem to have compromised on the camera aspect, while the Turbo mini has a 5-megapixel front camera along with a 13-megapixel rear shooter.

Finally, the biggest drawback in the Moto G is the lack of a microSD card slot, which you will find on the other two. The Iris Pro 30 gets 4GB onboard storage + up to 32GB microSD card, while the Turbo Mini has the same configuration. This could be a major dealbreaker when it comes to the Moto G. However, the price, the colourful design and the latest version of Android are all points in the Moto G’s favour, which could nullify the lack of expandable storage.