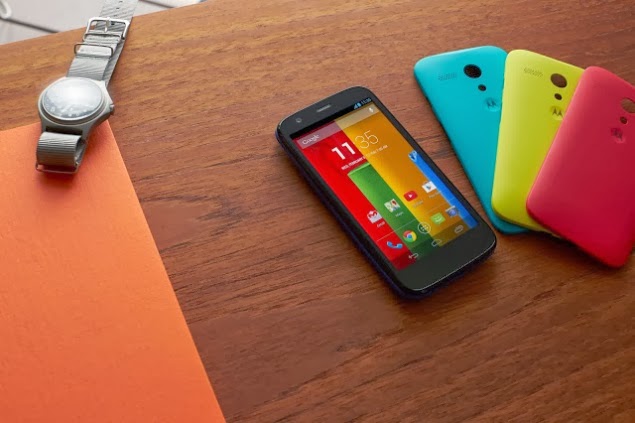 After weeks of speculation, Motorola has officially unveiled the Moto G smartphone at an event in Sao Paulo, Brazil. The Motorola Moto G will be available in at least 30 countries with Google’s partners by 2014.
Google owned handset maker has announced that the Moto G will be sold through the company’s website in US, with no contract, no SIM lock and an unlockable bootloader at $179 (Rs. 11,300 approximately) for the 8GB inbuilt storage model, while the 16GB variant will be available at $199 (Rs. 12,600 approximately).
Motorola Moto G will be available in Brazil starting this week, and the smartphone will be released in Latin America, Europe, Canada and parts of Asia over the next few weeks.
Interestingly, Motorola has finally confirmed that Motorola will be re-entering India with its latest Moto G smartphone, with a launch in “early-January 2014”. Other markets to get the Motorola Moto G in the same period include the US, the Middle East and more countries in Asia. Further, Motorola announced that Moto G will also be available in a dual-SIM variant, for selective markets.
While announcing the Motorola Moto G, Dennis Woodside, Motorola CEO also compared the device with some premium smartphones and said, “Today we’re introducing Moto G, a smartphone that delivers a premium experience for a third of the price of current high-end phones.”
The Motorola Moto G runs Android 4.3 out-of-the-box and the Google-owned handset maker also ‘guaranteed’ that the smartphone will be getting the Android 4.4 KitKat by January 2014.
It features a 4.5-inch HD display with a resolution of 720×1280 pixels and boasts a pixel density of 329ppi. The Moto G is powered by a 1.2GHz quad-core Qualcomm Snapdragon 400 processor along with 1GB of RAM. On the camera front, the Moto G sports a 5-megapixel rear camera along with an LED flash and also includes a 1.3-megapixel front-facing camera. The rear camera supports HD video recording. The Motorola Moto G also features water-resistant coating.
The Moto G packs a 1950mAh battery, which Motorola claims can deliver up to 30 percent more battery life than the Apple iPhone 5s. The Moto G also features removable curved back and the company also announced a bunch of accessories including coloured removable shells, flip-cover and some music accessories like JBL wireless speakers for the device.

Motorola just unveiled their newest entry, the Moto G, and it’s looking to be a game changer. Although the smartphone will surely be slammed by first world smartphone owners as under-powered and undesirable, the affordably priced unit will finally bring the latest Google software and decent specs to many who otherwise could not afford it.
Spec wise, the Moto G touts a Snapdragon 400 quad-core processor running at 1.2 GHz, a 5 megapixel camera, 1 GB of RAM, a 4.5 inch 720p HD display, and will come with 8 or 16GB of storage. The device will ship unlocked and untethered, all for $179 for the 8GB model and $199 for the 16GB model. The Moto G will ship with Android 4.3, and will receive Android 4.4 KitKat in January.
Motorola has made a video showcasing the Moto G, and it looks pretty sweet to me. Check it out below, and expect to see the Moto G hitting U.S. shelves in early 2014.