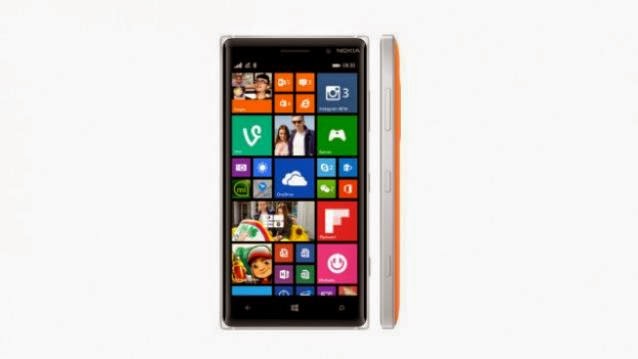 Lumia 830 is seen in this file photo.

All three devices will come with an additional 1TB of free space on Microsoft’s OneDrive, which will be free of cost for the first six months, and then chargeable at the rate of Rs 125 per month.  In addition to this free space, all devices are running the Windows Phone 8.1 build with the Lumia Denim Update, which offers features like Cortana for India users (Cortana is the Nokia personal assistant like Siri), Live folders, Apps Corner, and SMS merge and forwarding which lets users select individual text messages to either delete or copy- paste into a new message.

As far as the specs of the three smartphones go, here’s a quick look.
Lumia 830: This one is a phablet with a 5-inch screen with ClearBlack display, and the screen resolution is 720p. The pixel density is 296 ppi. The device has a HD screen and comes with Corning Gorilla Glass 3 which will make it scratch-proof.

The processor is a Snapdragon 400 clocked at 1.2GHz and comes with a quad-core processor. The RAM is 1 GB, while storage memory is 16 GB. The smartphone supports a microSD card which allows expansion up to 128 GB. In addition to this, Microsoft is offering free cloud storage worth 15 GB.

The camera is 10 megapixels with 4K recording capability. This is a PureView camera with ZEISS optics, and has Optical Image Stabilization (OIS). Sadly the front camera is a paltry 0.9 MP with 720p recording capability. It has a 2200mAh battery with wireless charging support and according to Microsoft, the maximum talk time (3G) is 14.8hours which sounds pretty impressive. Lumia 830 will come in Bright Orange, White and Black.

Lumia 730 Dual-SIM: This is the selfie smartphone from Microsoft and has a 4.7-inch screen with 720 p resolution Corning Gorilla Glass 3, and pixel density of 316 ppi.

The smartphone has a 5-megapixel front camera with full HD recording and shooting capabilities and a wide angle lens. The rear camera is 6.7 MP, with 4x Digital zoom, and LED flash. The processor is a Snapdragon 400, quad-core clocked at 1.2GHz. The smartphone has 1 GB RAM, 8GB storage space and supports microSD with 128GB as the limit. There’s also free cloud storage space of 15 GB.
The battery is 2220 mAh and Microsoft is promising 17 hours talktime on 3G on this device. This smartphone does not support wireless charging.

Lumia 730 will come in Green, Orange, Dark Grey, and White.

Lumia 930: Lumia 930 has a full HD, 5-inch screen with Corning Gorilla Glass 3 and a screen resolution of 441 ppi. The processor is Qualcomm Snapdragon 800 which is a quad-core one and clocked at 2.2 GHz. It has 2 GB RAM and 32 GB total memory space but no support for MicroSD. Also it only comes with 7 GB of free space on OneDrive. But remember all three devices also get six months of free 1TB extra space on OneDrive which will later be charged at Rs 125/month.

This smartphone has a 20 megapixel PureView camera with 2 x digital zoom and Dual-LED flash. The front camera is 1.2 MP wide angle lens with 1280 x 960 pixels resolution. The battery capacity is 2420mAh and Microsoft says that on 3G the talktime will be 17.9 hours.
The Lumia 930 will come in Bright Orange, Black and White.